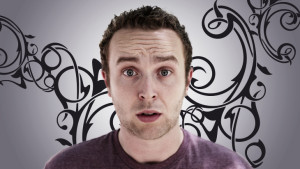 Tattoos are a permanent fashion choice: one which can either be worn proudly every day for the rest of your life or, if you are like Hunter Smith, be a sad and endless stamp of regret.

Smith really hates his tattoo, and who can blame him? It is hilariously tragic, and a forever reminder of his poor teenage decision-making abilities. Despite this, his shame doesn’t override the comedic potential of his ink embarrassment, and he has created a delightfully self-deprecating, tattoo-focused hour of stand-up.

I Feel Bad About My Tattoo is a very personal show, in which Smith talks about his family, his teenage years, and of course his infamous tattoo, along with many other observations about the ways that people choose to permanently imprint designs on their skin. He details the top three worst types of tattoos that a person can get, and makes some hysterical comments about the moments in time that these artworks represent, and what they have come to signify as the years have passed and fashions have severely changed.

Smith has a wonderful energy that fuels his honest, relatable comedy. He combines his self-esteem issues with some good-natured, light-hearted fun, and has ended up with a show that is both sincere and wildly entertaining. His anecdotes about living on campus while at university and scaring a certain group of students with his ink is very funny, while his short but succinct list of things he dislikes is classic side-splitting observational comedy. Quips about old people and technology, cultural appropriation and his cousin’s appearance on Australia’s Funniest Home Videos are eagerly lapped up by his audience, but the highlight is definitely the big tattoo reveal, which is kept a secret for as long as Smith can manage to hide his shame.

It is difficult to decide whether Smith should be laughed at or pitied for the unfortunate ‘artwork’ etched in his skin, but he has managed to transform his sorrow into enthusiastic entertainment in his 2015 festival show. As soon as he walks on stage, he exclaims that he is going to be presenting a whole bunch of ‘truth bombs’, and he certainly delivers on this promise. I Feel Bad About My Tattoo is brilliantly raw, consistently funny and will probably stop you from going out and getting that Southern Cross tattoo that you thought you truly wanted.

So what exactly is his embarrassing tattoo you ask? You will just have to watch the show to find out…

Hunter Smith’s I Feel Bad About My Tattoo is on at the Owl and the Pussycat until April 19.