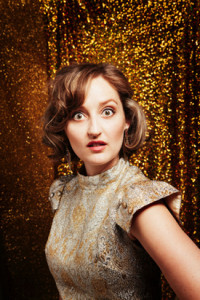 Well it’s pretty obvious what Madeleine Culp is trying to achieve with Madeleine Schmadeleine; deluded TV star on a desperate downward spiral, it’s not a particularly new concept and unfortunately Madeleine Culp isn’t able to bring anything fresh to it or make it work for her as a framework for her comedy festival show.

Madeleine just isn’t convincing as the difficult fame whore she is trying to portray, she is way too gentle and timid. She comes across as totally subservient to her TV show manager (a male voiceover) and her sense of desperation seems all too real as she fails to get the audience laughing. She also doesn’t seem to have the talent to convince us that she has ever been a successful variety TV host in the past, being bad at everything she demonstrates, such as singing, tapping, audience interaction (well it wouldn’t be a 2015 MICF show without that) and storytelling.

Madeleine was surprisingly competent on the recorder though and this could’ve been funny if she’d used it as a more credible background for her character – a recorder player who shot to fame, but she just throws it in to become part of her on camera breakdown which sadly does not work as well as it might if the rest of the show were better. The side plot of her sidekick dog taking over her place in show business doesn’t work because she has paced it badly, without a decent set up of her relationship with the dog and by putting a poster of his show out from the beginning, which robs her of the opportunity to get the surprise laugh.

As a performer who has been around for many years (originally in Cloud Girls with Jen Carnovale nearly ten years ago) with a lot of festival experience, it is surprising to find that her timing is not brilliant and I don’t hear her comedy voice. There seems to be very little attempt at creating strong memorable characters which are all pretty weak. There were obviously some set routines slotted in; some observational material from her job in a Library, a travel tales montage and an enjoyable story about a horrendous whale watching tourism experience done in the manner of an old sea captain telling tales of the sea. There were titters of recognition but few strong laughs. The highlight of the show was the remote control helicopter which again she proved crap at operating but it was at least fun to watch.

It’s a bit of a cop out to do a show with a character who is bad at stuff so that you don’t have to be good at anything on stage. But there is one thing that you do have to be good at in a comedy festival and that is comedy, unfortunately there was little evidence of this in Madeleine Schmadeleine.

Madeleine Schmadeleine is on at Trades Hall til April 19