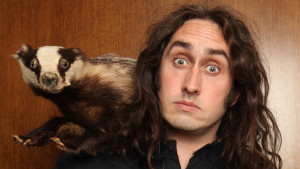 It’s difficult to know where to begin when reviewing a Ross Noble show. So much of his material is reliant on whatever he happens to notice in the crowd that opening night will no doubt be entirely different to the nights that follow. But the one constant that is always present is Noble’s impressive showmanship. It’s truly remarkable to watch his mind at work.

Tangentleman is a two-hour epic of a show. The entire first act felt improvised, Noble extrapolating ridiculous scenarios from the tiniest audience quirks. A man wearing two sets of glasses leads to an extended riff on lice that ends with Noble shot and bleeding, riding a stolen spider monkey out of the zoo. Two women in the front row spotting a spider culminates in an Andrew Lloyd-Webber-style musical number. In act two, there was a little more method to Noble’s madness, with a scattering of scripted material amongst the improvisation, but the comedy remained freewheeling and gloriously silly.

Noble is a master of the absurd. He takes the audience to some extraordinary places, but you’re never left wondering how he got there. Everything has its own bizarre logic. He has a knack for placing images so clearly in your mind that you would never have dreamt up in a million years. For me, the show had some misses. A few threads ran longer than they needed to and got crasser than my personal tastes. I found that stories that Noble had pre-prepared, like a riff on his resemblance to historian Neil Oliver, were his strongest material. But the reaction from the audience was overwhelmingly positive the whole way through. They were there to see Noble in full flight, weaving nonsense from virtually nothing, and they loved every minute of it.

Always incredible and frequently hilarious, Tangentleman is Ross Noble doing what he does best.

Ross Noble – Tangentleman is on at the Palais Theatre until April 18.