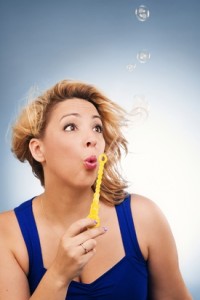 Kelly Fastuca has spent the last five years living in New York. After some very authentic public transport experiences, she’s returned with some killer material and an eerily perfected mid-western mom accent. Now she’s back in Werribee, and while all her friends are starting to grow up and have babies, Fastuca is still struggling to take care of herself.

Fastuca’s stand-up is as sharp as her KFC eating habits are sloppy. In I Need An Adult, she covers a lot of familiar themes – dating, body image, friends having families – but her endearing personality and infectious energy keeps the jokes original and surprising. Fastuca takes a refreshingly blunt look at life in your early 30s when you’re not very good at being a grown-up. Her material is clever and delivered with a gloriously bogan sensibility. Despite her time in the US, she still sounds very much like an Aussie.

Fastuca’s performance style is relaxed and she strikes up a fantastic rapport with the audience. She’s immensely relatable, talking about the kinds of grubby behaviours that we are probably all guilty of, but perhaps don’t like to admit. Her bit about eating habits while in a long-distance relationship struck scarily close to home for me, and judging from the knowing guffaws from others around me, everyone could find something in common with the material. Fastuca had the audience laughing non-stop with her quick wit.

I Need An Adult is a riotous work of stand-up. Fastuca’s life may be messy, but this show is just about perfect. If you don’t get a chance to catch her before the festival ends, be sure to keep an eye out for her in the future. Fastuca is a genuine comedic talent.

Kelly Fastuca – I Need An Adult is on in the Downstairs Lounge at the Grand Mercure Hotel until April 19.