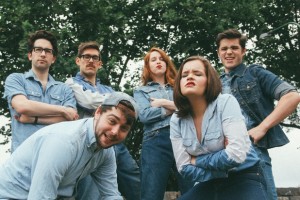 Melbourne locals Seemingly Evil (Alice Tovey, Clare Rankine, Melissa Trancia, Sam Garlepp, Lachie McKenzie, Will Reinehr and John Liacopoulos) returned to MICF this year with a fresh bunch of sketches. As the title would suggest, Mix Tape is a grab bag of skits with no unifying theme. Some are snippets of satire with a local bent, poking fun at tram inspectors and the like. Others wander into the realm of the absurd, such as a man going through a painful break-up with his microwave.

A good mix tape is well-constructed, paying careful attention to the transition from song to song. Seemingly Evil’s Mix Tape was more akin to an iPod on shuffle, fading to black and re-setting after each sketch. I found these cuts detracted from the momentum of the show somewhat, and served to emphasise the disconnected nature of the content. This would have been fine if the quality of the sketches was consistent, but pausing for applause after each sketch really highlighted when one wasn’t received as well as the others.

For an up-and-coming sketch group, Mix Tape is a solid piece of work. The show was uneven, but entertaining. There were plenty of good nuggets of comedy, but pacing was an issue. A few of the sketches fell flat, taking a long time in the set-up without enough of a pay-off. However, there were also some hits. One sketch featuring some alfoil-hatted visitors from the unforeseeable future of slightly later in 2015 was particularly hilarious.

The troupe work really well together and they look like they’re having a heck of a lot of fun on stage. There were plenty of fans in the audience and the room was filled with laughter the whole way through. Mix Tape may be a little shaky, but Seemingly Evil is a group to watch – they’ve got the talent and the ideas to produce something really great, and they’re almost there.