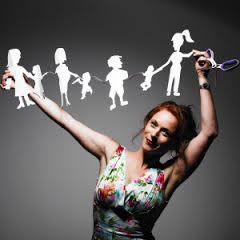 The concept of the ‘Inner Child’ is one familiar to many from the pages of pop psychology and often we are encouraged to ‘get in touch’ and ‘release’ this modern-day pixie. But what if after one released one’s Inner Child one found that it could not be returned? This is the central premise of Lana Schwarcz’s show Small Talk at the Courthouse Theatre in Kew.

Schwarcz plays each of the four central characters and voices each of the inner children with expert skill, clearly delineating each character through vocal performance, changes in posture and subtle tics and quirks – such as the habit of one character to push their spectacles up their nose – making it apparent which is speaking despite there only being one person on stage.

Protagonist, Tilly, is new-age dabbler who has created a machine which will allow people to not only see their Inner Child, but to also release it to allow for better communication and understanding and possible resolution of any issues before returning them whence they came.

Her three clients – a redhead with emotional baggage; a divorcee manchild and a pregnant professional with no interest in children – come to her therapy centre to experience this new technology and get better acquainted with their Inner Child. Needless to say – not all goes to plan.

Somebody sabotages the machine and it becomes a race against time – and sanity – to return the Inner Children to their rightful places.
Along the way there are plenty of laughs and some beautifully rendered beats of emotion as each character explores what has become of the person they once were. Some are endearingly shy and some psychotically homicidal, and how the Adults deal with these now-released inner demons holds the attention of the audience and does not let go for the full hour.

Schwarcz is a puppeteer and stand-up comic by trade and she brings these skills to bear throughout this show. The realisation of the Inner Children through puppets – one of which is initially invisible – is nothing less than impressive with Schwarcz using every trick at her disposal to make each as much a living, breathing individual as each of the adults she portrays. Carefully constructed props and subtle use of lighting effects reinforce the reality of the world being portrayed on stage. Schwarcz’s craftsmanship is impressive and her ease of use of each of her props makes for a smooth performance experience.

Overall this is a delightfully quirky show with plenty of laughs and touching moments which will hopefully warrant a return run.

Small Talk by Lana Schwarcz is on at The Kew Courthouse theatre, Kew at 8:00pm until May 9th.