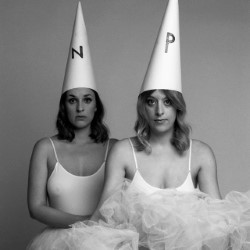 Wow! This was brilliant. Katie Norris and Sinead Parker perform a bewildering variety of characters in this show, using a rack of costumes, as well as singing (or butchering in one case) some parodies of songs, and keeping a thread of frustration and need bubbling throughout the show. They take us on a dark journey through history and the minds of some strange people while fighting one another for the love of an audience member and the desperate need for a proper job (rather than the vile demeaning job of a “female comedy double act” which is, apparently, what happens to failed “proper” actors).

The audience, and it was a good sized audience, were in tears at some of the characters, especially the teacher (Miss Cuntingham) and poet (Julie Cooper-Clarke), the How To Make A Man Of You sessions, dragging an (overly enthusiastic) audience member onto the stage and dubbing him Henry the VIII (he was very happy to give them his phone to get their numbers) and the battle between a generic Eastern European dance diva and a generic Southern belle.

There was no break or let up in the comedy and the show was so well structured that the hour just flew by. If you wish to be impressed by a pair of filthy, funny and feisty femmes taking over an hour of your life to make you roll on the floor laughing, then you must book a ticket to see this show. Word of mouth seems to be filling the shows up, so I recommend buying a ticket and getting along to see them ASAP.