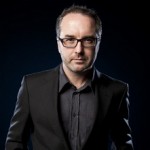 In 2007 Justin Hamilton changed the way he did festival shows and raised the bar for everyone when he performed his gorgeous, melancholy trilogy of shows about his love for Melbourne, a lost relationship and growing up in Adelaide, Three Colours Hammo. If any of you have been hanging out for another episode of the trilogy this is as close as it’s going to get. What’s more, it’s better.

Justin Hamilton is one of the best comedians in Australia and a master of taking his brilliant, hilarious stand up routines and working a sublime story around them in such a way that the whole feels organic and complimentary. Despite obscuring what is true and what is fantasy, it all feels like it’s coming from Justin’s gut. The plot of The Goodbye Guy revolves around an alternate yet hauntingly similar version of Justin who is famous for writing a humorous blog on a website called ‘The Crooked Smile’ but the culture has changed, it’s no longer making him happy and he’s struggling to realise that it’s time to change his life and move on.

Along for the ride, fans will be rapt to discover, are some familiar characters from the past. They include his nemesis, Jason Harrington (from The Killing Joke and Goodbye Ruby Tuesday) as the repugnant, successful, mainstream comedian made good and Kaliope his wise and mystical muse from Three Colours Hammo. These two play the good angel and the bad angel on Justin’s allegorical journey through his life and career. His comedy routines take the part of the blogs he’s written for the fictional website. Some of the routines are borne out of his actual blog and it is thrilling to enjoy them performed live. There are also tales as old as the hills appearing like old friends and new ones that had me falling about. Despite the many in-jokes for fans and those in the comedy community, Hamilton remains the everyman gag meister with hilarious stories about being mistaken for a New Zealand icon while touring with Greg Fleet and his inability to chat up women that will appeal to all.

Hamilton’s writing is cinematic with darkly humorous and romantic influences that include Woody Allen and, George Clooney’s film Up in the Air. Although it doesn’t stop being funny, there is a point where the stand up is left behind and that comes when Justin sits at his laptop to write his final blog ‘The Goodbye Guy’ while Bernard Fanning’s lovely ‘Weekend of Mystery’ plays for quite a lengthy time in a scene not unlike something from one of Daniel Kitson’s best story shows. A brilliant storyteller in his own right, Hamilton stretches beyond stand up to create theatre that’s more captivating and visceral than most of the stuff being produced by well funded theatre companies.

There are usually many shows at the Melbourne International Comedy Festival that advertise themselves as ‘must see’, but I can’t imagine that there will be anything as essential to this years festival experience as this. Justin makes it very clear that this will be his last festival show for the foreseeable future and although it is a devastating loss (because he is so damned good at it) I can’t wait to find out where Justin takes his talent from here. It’s a show about grief, about dealing with change, but most of all it’s about hope for the future and letting the child within dream.

The Goodbye Guy is on at The Victoria Hotel.