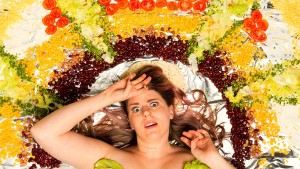 Lauren Bok has been performing in Festival shows for a while now, including Live on Bowen on channel 31, group standup shows and theatrical shows like Radio Variety Hour and Wander Women from earlier this year, but this is her first solo stand up show. Unsurprisingly, it’s an energetic and entertaining performance into which Lauren throws all of herself.

Lauren starts with some straight stand up that gives us a taste of her life as a comedian and comes across as very naturally funny. It does take a little while to warm up which is not surprising in this rather confronting, tiny, echoey room. The good thing about the space is that each echoing laugh sounds like an extra 3 people laughing and it instantly gives us the intimacy that Lauren is working to evoke with her words.

After some delightfully excellent mime Lauren warms into some longer form story telling. There seemed to be some influence from Amy Schumer in subject matter which, deliberate or not, is not at all surprising, most comedians tend to start out wearing their hero influences on their sleeves. Amy has also helped make it more acceptable for women to talk candidly about their sexuality and this is pretty candid stuff. There is never a sense though that Lauren is trying merely to shock or outrage, the atmosphere is warm and down to earth.

There is a delightful kookiness to Lauren’s performance that keeps the audience on side throughout what is a bit of a patchwork of a production and she has added interest with a smattering of props that are just enough for the show. Some of the patches worked better than others, the least successful part being her tale of grief which had not been signposted or even hinted at before it suddenly appeared. It didn’t feel quite audience-ready, but is engaging none the less and the audience can appreciate why it’s there.

This is an impressive turn for a first solo outing, Lauren has put a lot of ideas and work into making it entertaining and engaging. Fringe is a great place to take risks and learn and audiences will enjoy taking the journey with her.