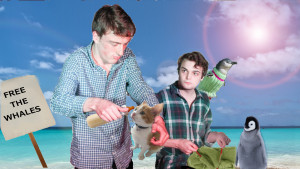 Josh Chodziesner and Patrick Rehill are decent human beings, or at least they try to be. In this hour of sketch, they dissect what it means to be a good person, poking fun at the well-intentioned, yet misinformed. The result is a hilarious bunch of sketches that sometimes stray painfully close to the truth.

Decent Human Beings is a sketch show both for and taking aim at the politically informed and socially aware. Chodziesner and Rehill skilfully skewer the deluded end of do-goodery, featuring smug, self-righteous male feminists, a cool but ultimately conservative pope, and politicians that aim for relatability over sound policy. The humour is sharp, but never cruel, firmly punching up at people on high horses of questionable moral standing.

Pat and Josh are a well-balanced comedic team. Rehill brings a manic, nervous energy that is offset by Chodziesner’s cool and collected straight man. Although these roles are generally maintained throughout Decent Human Beings, the duo show versatility in the characters they create. Rehill’s recurring character ‘Technically Correct Guy’ was particularly successful, as was Chodziesner’s turn as a sanctimonious radio host. The writing in this show is confident and thematically strong. The performances are a little shaky at times, but the odd verbal stumble is well and truly overshadowed by the quality of the material.

Decent Human Beings is a promising first outing from Chodziesner and Rehill. They tackle some potentially tricky topics with great wit and intelligence. It’s a wonderfully funny show that just might leave you questioning how decent a human being you are.