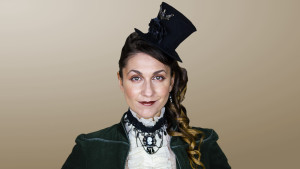 Rama Nicholas presented another gothic comedy tour de force, this time exploring the golden age of horror novels. It had lots of laughs, plentiful drama and many buckles to swash.

The script tended to focus on drama and action as opposed to out and out comedy. Things got a little sombre at times, enough to create the perfect mix of lightness and dark as our hero went on a physical journey as well as a personal one with a moral lesson to be learnt, just like all the best adventure tales. It wasn’t dour drama, there were enough witty asides to the audience, comic relief from the supporting characters, ribald quips from our lady monster hunter and interludes from an unhinged narrator to provide laughs when we weren’t on the edge of our seats.

It was interesting to see how many real life characters from that era’s horror literary scene were included in this fantastical tale. Their identities were clearly signposted from the outset so there were no great surprises with regards to a number of the jokes and plot points, particularly if you are well versed in these writers. Fear not, there were plenty of other twists and turns to keep us guessing and gasping as they were revealed.

There was a little bit of audience interaction with us collectively acting as Percy the Poet’s muse to compose a poem. This doesn’t really affect the show in any significant way but depending on the suggestions this could add humour to the show or simply be a lovely bit of verse.

On a bare stage, save for an easel, Nicholas plays all the characters, flitting between each using nothing more than gestures and voices to distinguish each. She does a brilliant job, ensuring that you don’t get too confused when more than two characters are interacting. We even get a taste of her beautiful singing voice as part of a dream sequence. Perfect lighting and musical cues were the cherry on top.

Nicholas has once again produced a show that will have everyone raving and deservedly so. It was a wonderful performance by a consummate performer.