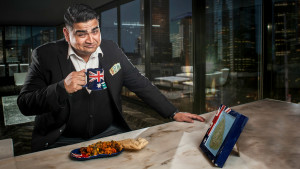 If you’re a Melbourne comedy fan and have heard a very loud, joyful, almost hyena-like laugh during a show, chances are it was Dilruk Jayasinha, sitting in the crowd supporting his fellow comedians. Thankfully, he brings his infectious laugh on stage in his own show as well.

After a successful season during the Melbourne International Comedy Festival with his show Immigrateful, Dilruk returns with an hour of comedy that is almost entirely new. In his MICF show he explored his experiences as a Sri Lankan in Australia, also touching on this country’s strained relationship with refugees and asylum seekers as well as racism – both casual and catastrophic – that seems to, unfortunately, make up part of our culture.

Sri Wanka still touches on these themes, particularly in a hilarious detour about the casually racist comments he has received when touring comedy away from Australia’s big cities. Sharp digs at Queensland and Perth are welcome and warmly received by the Melbourne crowd, but there’s also a more introspective element to Dil’s latest show. He’s a man who’s aware he is overweight but really enjoys drinking and eating. There are  also several very funny stories about; toothbrush wars, partying drunk, walking home drunk, waking up drunk… as well as some well-meaning advice from dad that doesn’t quite come out as expected.

Dilruk delivers all these stories and jokes in a very likeable, affable way that makes him a delight to watch on stage.

Sri Wanka is on at The Imperial Hotel til Sept 29