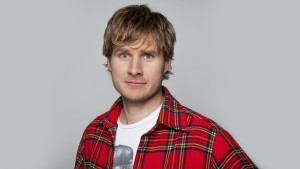 One of the first things I do every time Melbourne Fringe rolls around is check for shows from Melbourne International Comedy Festival that I missed out on seeing. That shouldn’t leave many considering I did the Funny Tonne this year, but somehow I missed Damien Power’s Barry Award-nominated show.

His brother, admittedly, is probably more well-known (Will is a championship-winning IndyCar driver) but Damien’s show is outstanding. The scene is set with some great golden-age hip-hop like Dr Octagon before Power emerges with salt, presumably to bless us before the show though we never really find out.

The show that follows is an hour of knock-out comedy in which Power, among other things, brags about his ability to fix printers, expounds on the mind-opening abilities of psylocibin mushrooms, humanity’s innate need for connection – how warm is the lady at your local ethnic fruit shop?! – as well as porn’s disconnect with reality and the heavy-handedness of Maccas’ marketing strategies.

Quite thought-provoking is a bit exploring religion and insanity – we’ve all walked briskly past a homeless man ranting and raving in the street, but what if that was flipped? What if all the great religions of the world had not existed but instead were simply sprouted by kooky people on the street? Sometimes comedians’ tendencies to explore big, philosophical issues like this fall flat, but Power keeps the preaching to a minimum and the laughs at a high.

Power is filming his show on Tuesday, Wednesday and Thursday this week for a DVD so be sure to get along and experience it before it finishes. Recommended

I Can’t Believe I Cared is on at the Imperial Hotel until October 2nd.
For booking information visit https://www.melbournefringe.com.au/program/event/view/979208b2-f3d0-424a-a1c9-c5a4732b83b2