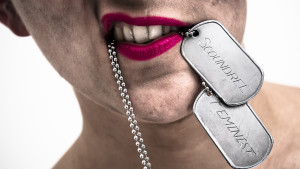 Heroes can be important, particularly for a young girl. Rowena Hutson chose to look up to the male characters from the many action movies she watched and here she explored the attributes and foibles of such heroes and what life lessons they can provide. What followed was an emotional rollercoaster that entertained and informed.

The show began with a hilariously over the top staging of all the Die Hard movies with non-stop gunfire and blood pack wounds. Hutson then moved into stand up about growing up a tomboy, gender confusion and her love of action movies. She went into great detail about her family’s eccentricities , not all of it was wall to wall laughs but it was relatable and she could certainly hold the audience’s attention.

When Hutson wasn’t delivering monologues, she was dancing around holding handwritten cards featuring quotes from and observations about her beloved heroes. Combined with some silly costumes and some comical dancing, these musical interludes were a fun idea. Most of the humour on these cards was based on recognition of the particular film, so if you hadn’t seen it you’d miss the joke. This was a charming device but got a little repetitive after the second time. She also got amongst the crowd, flirting with them in the guise of a favourite action hero.

The performance took a sharp turn into some very dramatic territory about a very personal experience that needed to be told. Some may have telegraphed where things were headed but for most of us it was quite a shock, seeing as she initially sold this as a fun and raunchy story. Compared to the frivolity that proceeded it, this was heavy stuff and save for the odd nervous laugh from some uncomfortable punters, all humour was put on hold. The scene was played out brilliantly, alternating between dancing to a sexy song and halting the music to recount the incident in great detail. Not only did it put the audience into a state of unease, this emphasized the event as predator versus victim. She had built up enough goodwill with the audience that they willingly went with her and thankfully things had an optimistic finale, it was all wrapped up with a wonderful letter to her younger self.

This was an impressive performance. It was a brave, powerful and important show that needs to be seen by everyone, not just by teenage girls who need to hear the wisdom that Hutson expounds.

Strong Female Character is on at the North Melbourne Town Hall until October 3rd.
For booking details visit https://www.melbournefringe.com.au/program/event/view/4844bb94-ac38-4c79-b161-3002f3eca8de