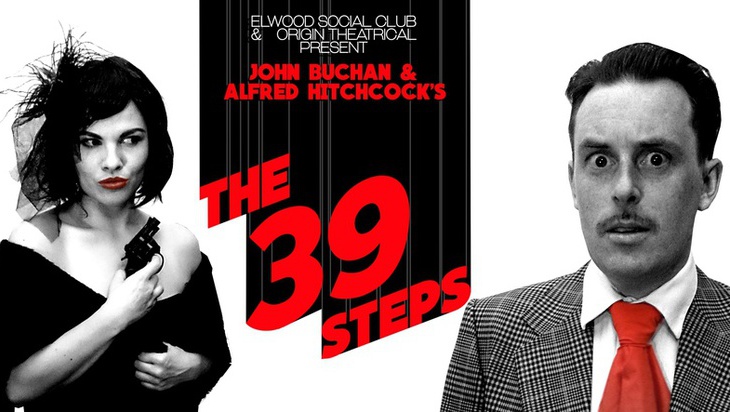 While this may seem like a strange reason now, it is inevitable that, come late-March people start binge-ing on the Festival’s staples: stand-up and sketch comedy. Theatre, by contrast, is traditionally under-represented as a comedic form. So do yourself a favour when planning your MICF diet, and sprinkle in a little theatre. With suspense, shock, romance, a rollicking narrative and many many accents in The 39 Steps your comedy brain will thank you later!

2. It’s the perfect night out

Here’s how you swing it: catch a 6pm show (possibly at the Town Hall), then dinner. Delicious. The 39 Steps starts at 8.30 just around the corner on Collins St, runs for two hours (with an interval). Then at 10.45pm you’re off to Festival Club for some late night laughs and, on the weekends, dancing. BOOM. Best night ever, with maximum laughs and minimal walking.

3. It was good enough for Alfred Hitchcock

The 39 Steps was first a novel, written by John Buchan. In 1935 Alfred Hitchcock, then an up-and-coming director, adapted it into a film, widely renowned today as being the first cinematic spy thriller, and setting the marker for Hitchcock’s now iconic “innocent-man-embroiled-in-an-international-conspiracy” plot device which he was to utilise many more times in his storied career. But it all started with The 39 Steps! And as we know, the original often the best.

4. The show has an impressive track record

The original West End production of The 39 Steps debuted in 2005 and only closed in October last year, its nine-year run the single-longest in West End history. With a long and proud history of excellence, this new production will do everything to live up to the lofty standards The 39 Steps has set!

At $22 for a two-hour show ($10 for the preview!), the economics make for pleasant reading by any metric: entertainment minutes per dollar, laughs per dollar, all high! Plus, now that you’ve effectively saved $20 on that second hour-long show you no longer have to see, there’s a couple of extra brewskis paid for. Mmmm. Brewskis.

For more information go to the MICF site: http://www.comedyfestival.com.au/2016/season/shows/the-39-steps-john-buchan-alfred-hitchcock-s