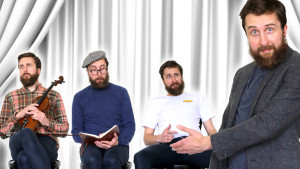 The phrase “open mic night” is one that tends to strike fear into my heart. You never know who you’re going to be watching, and often those with the confidence to leap up on stage are the ones who should firmly remain seated. But at Java Joe’s open mic night, you’re in safe hands, as every act is performed by the very talented Broni.

In A Night At Java Joe’s, Broni displays his character acting chops, playing six very distinct performers, as well as the evening’s host, Jimmie Lunsford. A quick, small costume change demarcates each character swap, but the difference is really found in Broni’s physical interpretations. Small touches like a slight tremble in the hands, or a slyly confident “yeah” added after every song lyric make these characters feel like genuine people.

Although all the characters were well-realised, there were some particular stand-outs. Tumbleweed Tilly, an ingénue with a passion for travel, was perfectly breathy and clueless. Beat poet Peter Raymond read some hilariously pithy lines about birds, and gave Broni a chance to interact with the audience as he sought some constructive feedback. Elderly farmer George Thomas McTavish delivered sweet ramblings about his wife and a song or two, striking a good balance between the sappy and the silly.

The music in A Night At Java Joe’s is lovely, infused with a gentle humour and adding a further layer of characterisation to each of the performers. As described in the guide, the show is “music and comedy” rather than “musical comedy”. The songs aren’t loaded with jokes, but become funny when performed by Broni’s characters.
A Night At Java Joe’s is a delightful exploration of character. Broni has created a likeable, amusing cast with enough variety to keep you laughing. You’re unlikely to find a better open mic night at the festival.