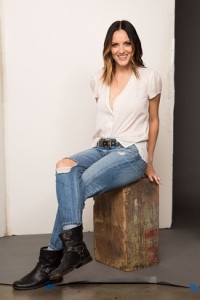 Jen Kirkman is back and bringing a show as classy as her Arts Centre Venue. Last year I caught her on the final day of the festival and adored her show, then a month later caught her being fabulous in great lineup at Nerdmelt in LA. So I looked forward to seeing her in Melbourne this year and she’s managed to exceed my expectations.

Walking out on stage Jen’s confident presence nearly hits you in the face. It’s an American sort of confidence that is nearly tangible, coming from a New York drama school and many years as a performer. This is despite it being a preview show with the odd glitch that she deals with beautifully, turning it around to make the audience feel like they are part of a special performance with ‘extra footage’ other audiences will be missing out on.

I Know What I’m Doing & Other Lies I Tell Myself: Stories From A Life Under Construction is a pretty much what it says on the box. Tales about growing up; her stressful family life and dreams to escape to Hollywood to be part of a perfect sitcom family as a great actress, her work to conquer her fear of flying (no spoilers in suggesting that it seems to have been successful thank goodness), her fear of nuclear Armageddon and a road rage incident that near sent her over the edge. The thing that really stands out is her anxiety from childhood til adulthood, yet none of it appears to be on stage. She’s so poised, warm and confident.

Jen reminded me a bit of a calmer Maria Bamford, with her brilliant, very personal storytelling and her delightful impressions of her Boston parents with their charming flat accents that she has lost along the way. Her open, detailed stories about discovering sex at a later age than her friends are refreshingly unsensational, relatable and more about her anxiety about it all, which she realises now, everyone experiences. The musical interludes between stories are perfectly chosen, she has actual documents from her childhood to read out and even performs some choreography.

Jen has brought a Broadway level of performance to The Arts Centre and her string of epic life stories are funny, poignant and will linger with you long after the show ends.

Jen Kirkman performs I Know What I’m Doing & Other Lies I Tell Myself: Stories From A Life Under Construction at The Arts Centre