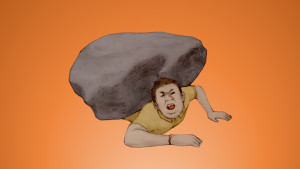 Yes, Michael Williams is trapped under a rock for the majority of this show. You will have to come along to find out the why’s and hows and so forth, and yes there are references to the film 127 Hours. There are also lots of other references to 80s and 90s TV and movies that are often hilarious. The whole Windows 95 feel of the graphics makes you wonder if the show isn’t set in an earlier period. Maybe it is. Or not. There is also a really exciting bit where… oh Damn, I can‘t really tell you about that because it will spoil the big surprise which is so much bloody fun!

Most surprising for me was the big opening introduction number to the tune of Mac The Knife which Michael sells hard and sings fairly well. There are other hilarious comedy songs sprinkled throughout, I’m still singing “Graph Jokes” to the tune of Footloose, and he is joined by his cohort Jack Druce for a dance number from singing in the rain. Alright Michael will never be Gene Kelly, but it’s all a big hoot and he and Jack are enthusiastic and very funny.

Michael Williams has come a long way since he was the shy kid who brought his big easel in a car packed with other aspiring comedians driving 3 hours from Warrnambool for a gig in Melbourne, got a lot of awesome laughs from his drawings on a giant flip pad, (remember the comedy flip pad craze? Well Michael found ways to get laughs from them that were better than most), and then it was all the way back again. (What is it about Warrnambool? Duff, Dave Hughes, Tom Ballard. Something in the whale filled water no doubt). This Michael Williams is all singing, all dancing and all modern technology. Why stick with giant flip pads when there are projectors and all of the internet at your disposal? Though his drawings still have that hand made charm and add to the sense of nostalgia that permeates the show.

Michael Williams has been a popular local performer for a long time, anyone who sees him can’t help but love his work, and it’s time he was rescued from his rock of obscurity and was appreciated by a wider audience. I can see his comic ability with graphics working beautifully on TV. This is a fabulous, funny adorable show from Michael and something I can definitely recommend for the whole family.