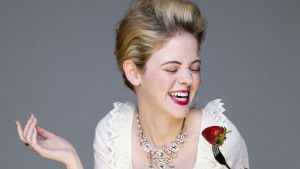 In the City of Love is a show that’s centred on a disappointing early-20s voyage to Paris, but Tegan Higginbotham, the charming, perennially smiling protagonist of the story, deftly weaves into it much broader topics and punch lines than just the inevitable let-downs of international travel. Sure, she does touch on the cliché of Paris as a romantic Eden to the rest of the world where every couple is Lady and the Tramp-ing a baguette at the foot of the Eiffel Tower. But the fact that Paris in reality is often piss-soaked and unwelcoming is itself becoming a cliché, and Higginbotham, now ten years into her career at MICF, wisely keeps those observations to an illuminating few during an hour of humour that dances from topic to topic, and from the observational to the confessional.

Higginbotham’s experience as both a comedian and an actor is obvious in City of Love. One minute she tells personal stories, the next she goes on observational tangents. Though she’s astute when diagnosing our shared anxieties over public bathroom etiquette and other non-problems, easily the best and bravest portion of her show was when she shared some artefacts she’d dug up from her youth. You know how as adolescents we all did something that completely sucked? Maybe it was a shitty band, or break dancing at a talent show, or perhaps most ubiquitous, keeping a lame diary with all the lame pseudo-adult observations of an actual non-adult. Well, this is the calibre of stuff Tegan shares, blown up on the projector beside her, and it killed. I won’t spoil for you exactly what she shares, but it’s real and squirmy and awesome. Although this is the obvious peak, the rest of her set is strong, and is generally delivered pitch perfectly. In fact, if there is one thing Tegan could tweak, it would be to deliver some of her lines more casually. Where the honesty around her embarrassing teenage expressions of creativity renders her completely endearing, occasional moments where she perfectly enunciates a punch line can bring out more of the actor than the comedian in her, and can leave you doubting the story.

Overall, In the City of Love is a fine show, thoughtfully written (if occasionally delivered a little too perfectly), and showcases a hard-working comedian in the prime of her talent. (This probably won’t interest anyone but a French or women’s history buff, but extra kudos to Tegan for her nuanced interpretation of Marie Antoinette as more than just a narcissistic cake-pusher but rather a relatively powerless cog in a sick social order. Okay, uh… let’s get back to the review.) Though it’s definitely not an after-school special, it often has the tenderness of an old sitcom, especially evident by the hour’s end; though on the surface it’s about Tegan’s journey to France’s capital, In the City of Love is a considerate meditation on the bittersweet adult realities of childhood dreams.