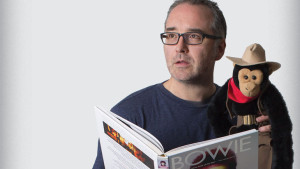 This is a show for fans, fans of Justin Hamilton, fans of David Bowie and people who are likely to become fans of either or both by this show’s end. Justin’s show’s are mostly personal storytelling shows, but there are always, unsurprisingly, several layers of showmanship dividing the material from the comedian. In this show Justin has peeled a lot of those layers away, its hard to hold them up when you are grieving, but he’s a comedian to his soul and this is still a very funny comedy festival show.

Hoot is like catching up with your chatty friend (or dare I say friendly ex boyfriend) that you haven’t seen much of since he moved to that new fabulous job (producing breakfast radio) in Sydney. Well he was having a pretty great time ’til January 11, a date that keeps popping up throughout, he doesn’t have to elaborate, we know the significance, or will by the end. Sydney life seems to be agreeing with him, he’s lost weight, he’s getting to know his outrageously expensive inner city neighbourhood and he explains why the change was important to him in his life at this point. (Its not you Melbourne, its me)

Justin decided to go off social media in January and his hilarious routine about a day in a life with social media and how it can really take over your whole day and drive you crazy is a classic. It obviously didn’t help with his life long issue of over thinking everything, which can be a great way to make comedy but not so good with your social life. It‘s a sensational routine he could perform anywhere and got a very appreciative round of applause.

The last part of the show is where he hands it all over to Bowie. Anyone who loves Hammo’s work knows that he loves David Bowie and that this show is going to feature Bowie. When we first heard that David had died in January our first instinct was to send condolences to Justin, as if our friend had lost his dad. The first Justin Hamilton solo festival show I saw talked about the David Bowie concert his groovy Mum took him to as a child and we got to hear that wonderful joyful story again, this time coming from a different angle. It was fabulous to reminisce in all his hilarious Bowie stories and share the love and grief. This feels like a bit of a bookend to that show I saw many years and stories ago and also a bit of a celebratory wake.

Bring tissues, the last time I cried this much at a Justin Hamilton show it was over a (mostly) fictitious girl called Kalliope in 3 Colours Hammo, an ambitious three part show that has become Melbourne International Comedy Festival legend. Justin’s best comedy often shines out of dark places. This is the heartfelt comedy show he had to do and one that you have to see.