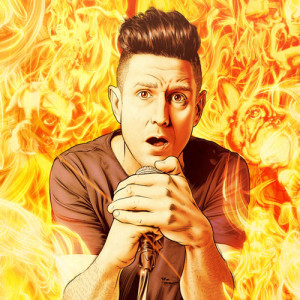 Wil Anderson’s Fire at Wil hits the ground running, it’s fast paced and filled with satisfying satire. Wil’s demeanor is manic, with a hint of nervous energy despite his impressive 21 years in stand up. It was a captivating display.

Packed with insightful quips, Wil interweaves social and political themes creating a firm-balancing act. His ability to draw the audience in, rather than causing isolation is due to his strong delivery of topical events and relatable views. Racism, gun laws and Adelaide are just a few in the firing range. Although, upon applause he reminds the audience the show ‘is not a Ted Talk’ and quickly moves on before getting too stuck into one idea.

While Anderson is a comedian who is up for a bit of audience banter, this particular night didn’t have it. More than likely due to how high material driven the show was. It appeared Wil had more gear than time would allow, so he didn’t skip a beat in squeezing in more ideas leading to further insight and laughs.

Fire at Wil highlights a compelling Australiana commentary that will amuse even the broadest of audiences. Come for Wil’s razor sharp wit and rapid punch lines, stay for his likeability and the memorable anecdote, which reveals the reason for the show name.

Get fired up and ready to go to Fire at Wil, as it clearly maintains the fact that Wil Anderson is the master of comedy.

Wil Anderson Fire at Wil is on at the Comedy Theatre