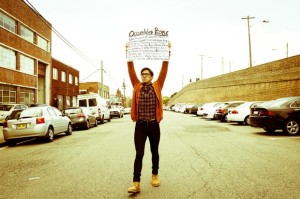 It’s been a big year for Michael Hing. He’s been doing some work for the ABC, most notably appearing on the TV show Good Game. He also supported Marc Maron on his recent Australian tour. The Unbearable Whiteness of Being shows just how deserved this attention is. Hing’s stand-up is clever, sharply-observed and uproariously funny.

In The Unbearable Whiteness of Being, Hing talks about his experience as an Australian man with Chinese ancestry. While Australia is less racist than it was 50 years ago, there’s still a lot of weirdness around race – and where there’s discomfort, there’s comedy. Hing’s material on race ranges from the personal to the broader national conversation. A story about an encounter with a man in Wales who was confused by Hing’s appearance was hilarious, and illustrated the truly baffling forms racism can appear in. Another highlight was his take on the media’s reaction to blackface, though it says troubling things about the state of morning television when you can straight-up read a transcript of Sunrise and it gets laughs. His recent successes are also mined for comedy. An account of the ordeal that was his Cleo Bachelor of the Year photoshoot is painfully funny and outright mortifying.

Hing’s delivery is affable, filled with witty asides and the occasional tangent. The show feels fresh and un-rehearsed – a collection of really great funny stories, rather than overly-crafted set-up-then-punchline jokes. Hing is completely at ease on the stage and doesn’t pull any punches with his material. It’s a performance that sits in that sweet spot where he’s confident enough that you feel you’re in safe hands, but is vulnerable enough to be relatable.

The Unbearable Whiteness of Being is smart, honest stand-up from a talented comedian. Get along to see Hing perform before he inevitably gets bigger.

Michael Hing – The Unbearable Whiteness of Being is on at The Greek Centre, Aphrodite Room until April 17.