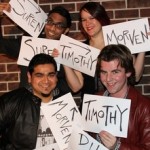 Given the pronunciation of the show title, it’s inevitable that sex features as a topic. In fact all the performers fall back to smutty jokes when their other material doesn’t get the big laughs. Timothy Clark, Morven Smith, Dilruk Jayasinha and Suren Jayemanne (aka Jay E Manne) are joined by a guest MC to bust out their best ten to twelve minutes. Despite mining similar topics, the performers are varied enough to provide an interesting taster plate of new comics on theMelbournecircuit.

The guest on the night I attended was Aiden Pyne who is an excitable wild man. He attempted to whip the crowd up into a frenzy with some dodgy puns, crazy poetry, weird rapping and plenty of shouting but he soon settled down with self deprecating tales of his lack of action in the boudoir. I was intrigued by his modus operandi of digging a comedy hole before introducing the next act, going against the first rule of being an MC. I’m not sure how others viewed it but I found his mini attempts at sabotage hilarious.

First to hit the stage is Clark with plenty of witty wordplay and puns of varying quality. His jokes go to very dark places with filth, offence or a combination of the two being the order of the day. It’s not delivered with any real nastiness, instead he adopts a confident smart-arse persona. He spouts these lines in a rather dismissive manner which manages to elicit laughter and then cause you feel guilty immediately afterwards. A fair chunk of his jokes can be telegraphed, giving you plenty of time to prepare your groan.

Smith is the token female, who delivers tales of sexual predators and jilted love, treading similar ground to the males on the program, albeit from a different perspective. She has an upbeat yet bitchy and cynical air to her stage persona that fits. The tried and proven method of delivering punchlines with biting sarcasm or feigned ignorance reinforces the amusing irony of her material.

The supremely charismatic Jayasinha is next to strut his stuff and impresses with his storytelling. We hear all about his disillusionment with his career, the apathy that struck during university and his lack of luck with the ladies. His main story about a mugging isn’t full of laughs but goes in some unexpected directions to maintain interest and deliver a satisfying pay off.

Rounding out the evening is Jayemanne who bills himself as deadpan but doesn’t really nail it. He is far too animated and expressive to develop the correct atmosphere for the form but his material is certainly subversive. A centrepiece routine about a full body massage manages to combine truncated storytelling with clever wordplay and puns. He comes across as a light hearted version of Clark, neatly bookending this amusing hour.

Originally reviewed at The Melbourne Fringe Festival and published by Chortle.Au on Monday 3rd Oct, ’11

To Celebrate our Featured Podcast we are republishing a room review of The Shelf from it’s Debut at The Toff in Town.

Melbourne has a fabulously healthy live comedy scene with venues offering comedians for all tastes, from the nervous newcomers to the polished stars. Four months ago Melbourne comedy legend Dave O’Neil started up his Comedy Funhouse in Fairfield and now two other stalwarts have opened up a weekly room, for the month of October at least, and have their own fun.

These two are Fabulous Adam Richards, gossip bitch of top rating breakfast radio show The Matt & Jo Show,and Justin Hamilton, currently a movie reviewer for breakfast at Mix FM in Perth but cherished as Australia’s best stand-up comedian who isn’t a household name. They seem like an unlikely pair of mates, but apart from both being astute experienced comedians they are geeky fanboys at heart and have obviously created a place where they can put on a show in their own terms and have some fun with friends.

So what is The Shelf and how is it different to the established rooms about town? For starters it has a team of regulars joining Hamilton and Richards: Steven ‘Gatesy’ Gates of Tripod, Tegan Higginbotham of The Hounds and relative newcomer European Man (Ted Wilson). The evening is separated into three distinct brackets, the first is a bit of a mix of chat, stand-up and music, the second a full long set from a headlining guest and the third a live trivia gameshow.

The first section on opening night begins with Hamilton providing a searing set about his recent shenanigans touring New Zealand with Greg Fleet, as well as introducing the evening and co-host Richards. Hamilton is fairly renowned as one of the best comedy MCs in the country and is the perfect host, clearly excited by his new enterprise.

The first guest is rising star Celia Pacquola, home from her new digs in London, her stand up just gets better and better as she becomes more assured about her work. Pacquola has a delightfully quirky edge to her comedy that always adds surprises to her warm, friendly style. She endears herself to the home crowd, which tonight is full of friends and comedy geeks, with tales about how she’s having fun in the UK using her Australian openness to freak out the Pommies.

Next up is a bit of a historical moment in Australian comedy, the first ever solo spot by Gatesy from Tripod. The highlight, which is going to be a weekly feature is his ‘Non Topical’ song where Gatesy sings a song that has been topical in the past, but is not now. Tonight’s song is about Stuart Diver being rescued. It was a bit shaky, but his experience at working an adoring crowd got him through.

The second bracket is pure nonstop Tom Gleeson, currently starring in Good News World and fresh from Edinburgh, where hecklers quickly learned that Tom is not to be messed with. In fact the bulk of his material was about how his hair-raising experiences at boarding school made him impervious to persecution. Tom is in top form, like a thoroughbred during the Spring Racing Carnival he sprints out of the gates with the crowd roaring, and is magnificent to behold.

The final segment is the least polished, which is part of its charm. A mini game show hosted by Richards, with team captains Hamilton and Higginbotham with a guest each, Pacquola and Gleeson. The trivia questions are about things found on the shelf: books, DVDs, CDs or games etc. Helping Richards are European Man and Gatsey, who provides the clues through song.

The room itself is set up in cabaret style with small tables. Toff in Town has hosted many legendary comedy nights including Tripod’s Pod August Nights and Asher Treleaven’s Oyster Club. On this night, I couldn’t recommend the bar as everyone on our table had bad experiences with service. A more positive aspect is that you can book your seat and know in advance that you will get in, which is important for a room with a limited run and popular line-ups.

There is nothing revolutionary about The Shelf, it reminds me a little of Hessie’s Shed by Crowded House’s Paul Hester which was a series of high quality live comedy and music with a trivia quiz at the end hosted by Brian Nankervis. That quiz went on to become Rockwiz on SBS, so who knows maybe ‘The comedy show you’ll never see on TV’ as The Shelf is describes itself, will somehow end up there anyway

Behind a nondescript door in George Lane lies the George Lane Bar. It’s located at the rear of the same building that houses the Melbourne Wine Rooms and the George Public Bar so it feels like a hidden-away rogue brother of the aforementioned drinking establishments. For the past fifteen months Commedia Dell Parte has been holding court here every Thursday night.

With its red lighting and asian themed décor, the room resembles an opium den or classy brothel (not that I would know what such places actually look like! It’s just an assumption.). This atmosphere is apt seeing as the bar lies a stones throw from the notorious Grey St in St Kilda.

Luxurious seating in the form of velvet couches and armchairs are laid out in rows before the stage to seat about 30. Additional seating is available on stools at the bar located near the back of the room as well as plenty of standing room in this spacious venue.

Even though not a lot is on display, this bar stocks a wide range of bottled beers and spirits. They are especially well known for their cocktails.

The night of comedy consists of a line up with about eight acts; a manageable number but it threatens to conclude past eleven when the performers disregard their allocated time. The talent begins with some new faces leading up to familiar names in the later and headlining spots.

Commedia Dell Parte works on the “pay as you feel” honesty system, trusting that punters will pay a reasonable amount for the night’s entertainment. Room organiser Marcus Newman farewells the patrons with his cash box, welcoming Gold coin donations as well as much appreciated notes.

The show starts at 8:30 so get on down there, grab a drink and support the local comedy scene. 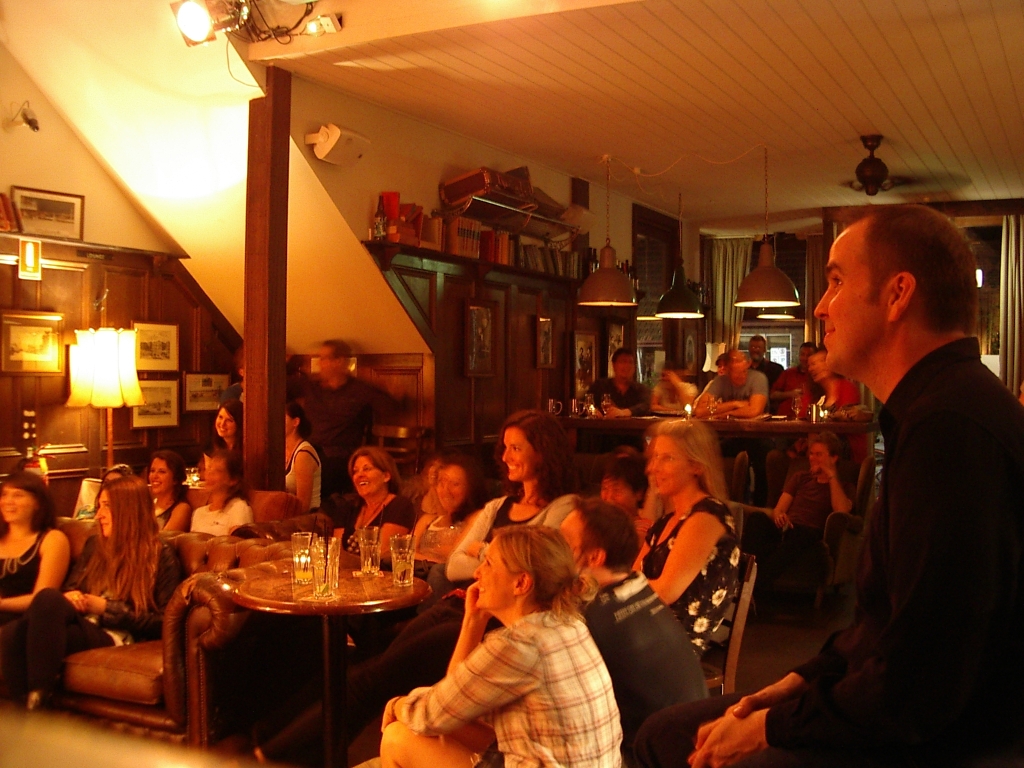