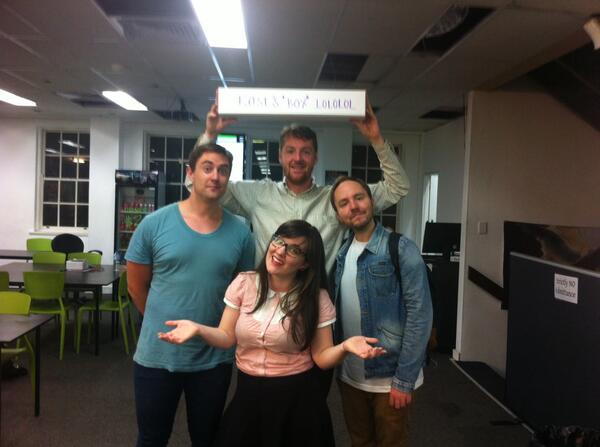 Mike Brown has created a great little digestif to your comedy evening with The Late Night Board Game Slumber Party. The Board game thing is a bit of a misnomer, there is no actual board, it’s basically comedians playing several party games late at night for your entertainment as well as their own.

Neil Sinclair wearing his pyjamas and comedy Tassie Devil slippers is our genial host and does a great job keeping things ticking and the comedians in check if they start getting out of hand. Guest comedians competing in the games the night we were there were Bart Freebairn, Tommy Dassalo and Callaghan. Although the audience is not broken into teams as such, each one comedian has a corresponding audience member who will win a prize if they win which raises the stakes a little and gives them someone barracking for them. Rules are pretty flexible, Neil gives and takes points, often on a whim, or for laughs and they are displayed on a screen for all to see.

The first game is ‘Crappy Birthday’ it seems a bit complicated in explanation but all becomes quickly clear as it is played. It’s a card game where the objects written on the cards such as ‘A bus trip’, ‘ A pet eagle’ or ‘comedy lessons’ are birthday presents awarded to fellow team members anonymously, who then award points for the best and worst picks. The comments and picks were very funny and had Tommy Dassalo shouting ‘This is the Worst Birthday Ever!’ at one point.

‘Who’z Dat?’ was a live version of ‘Guess Who’. Unbeknownst to the guests an audience member had their photo taken when we arrived and that photo is flashed on the screen behind them so all the audience can see who they are guessing. The audience stands and they take turns asking questions like ‘Is the person female?’ and they get their answer when all the men sit down, ’til everyone is sitting apart from the one in the photo. It was simple audience participation and great fun for everyone.

My favourite game of the night was a live version of ‘Jenga’ called ‘Midnight Stax’ with a great big tower of cardboard box sticks to stack. There were other games and there might even be different games on different nights. There will definitely be different guests each night and of course part of the fun will depend on their late night energy and willingness to put as much fun in as possible. We were lucky and had a team of performers who did just that.

I saw this show at Melbourne Fringe Festival last year but Mike has put a lot of work into making it much better and slicker. The only thing I’d add is more things on the screen such as graphics, pictures of the games being played or showing the cards on the screen (but I might be asking too much technologically) and more music cues. Still the dagginess is part of the fun and fun it was. If you are a gamer, there are prizes of games to be won and the venue is at Games Laboratory which is open for game playing (and buying) before and after the show. There are also snacks for sale and that’s always a good thing.

The Late Night Board Game Slumber Party is on at the Games Laboratory until April 12
http://www.comedyfestival.com.au/2014/season/shows/the-late-night-board-game-slumber-party

5 Good Reasons to see Bart Freebairn: The Age of Wonder 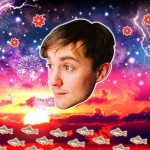 1. We were all kids once and our lives were full of interesting wonderful things. It could be fun to touch on that time once again.

2. Bart has a nice haircut and is rather handsome

3 Bart has consistently gotten great newspaper reviews and private messages from the queen. Find out his secrets.

4 This show has just come from a sold out season in Brisbane. There were no spaces left!

5 You could learn how to lucid dream.

Bart Freebairn is at the Spleen Bar
http://www.comedyfestival.com.au/2013/season/shows/the-age-of-wonder-bart-freebairn-in

5 Good Reasons to see Wrongtown:Population You! 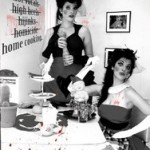 1. It’s where you belong

3. After you’ve laughed your tits off, you can buy a pair of Boob-ease

4. In Wrongtown we celebrate all things

5. “When you’re alone and life is making you lonely, you can always go, Wrongtown 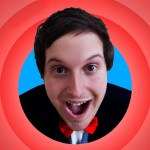 3. A Magic Trick that features a lot of rude words