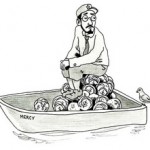 A modern Cuban Myth is not what I expected this Comedy Festival, but it certainly wasn’t unwelcome. In his new show “Mercy” Michael Workman weaves a tale as magical as the ancient Greeks, as surreal as Captain Bluebear, as adventurous as Star Wars, as tenacious as Castaway, as redemptive as the New Testament and as intuitive as Indiana Jones.

Workman starts the show by giving the audience a potted history of Cuba, going from the negligent Spanish colonists up to the reign of power of Fidel Castro. The heroes of the story are Augustus and Frida, a young couple in Cuba, married and expecting a child (Claudia). It is when Augustus, a journalist, criticises Castro that the conflict begins. Augustus is forced into a terrifying situation in which he floats on the ocean in a tiny boat with only cabbages as his friends and is made to make a decision between right and wrong.

Workman accompanies his show with beautiful illustrations which are presented in card form and as projections onto a television screen. He also used haunting music which he played on his keyboard, finally singing an eerily poignant song to his own accompaniment.

This show is consistently littered with humour and Workman’s humour is its own beast. He takes a standard format like the pull back and reveal and brings to it his improbable conclusions, creating a pudding of ‘regulation absurdity’. One detraction I will make, however, is that something prevented me from becoming emotionally involved in this story, stopped me from feeling for these characters. I suspect in this regard that Workman might be too clever for his own good, crafting the show; the language; to the point that it appears like an exquisite, but distant, artwork, drained of its vulnerability.

Overall, though, this is a refreshingly original show, containing plenty to learn and much to ponder. Highly recommended.

Postscript: This show had nearly a full house on the night and my biggest complaint was the uncomfortably cramped conditions common to many venues, with chairs being pushed too close together.

After another very successful Fringe where ticket sales were up by 10% The Adelaide Fringe Festival Awards were handed out yesterday. Michael Workman, who won best Newcomer at last years Melbourne International Comedy Festival won the Best Comedy award for his new show Mercy. Workman is originally from Perth and won Raw in 2008, which was his first year of doing comedy and that saw him flying off to perform at the Edinburgh Fringe. Workman will next be performing Mercy at the Melbourne International Comedy Festival. The other nominees were Andrew O’Neill for Alternative and Felicity Ward in the Hedgehog Dilemma.

The Award for Emerging Comedy Artist was given to UK hip hop act Abandoman who are Rob Broderick and multi instrumentalist James Hancox.

The Pick of the Fringe went to sexy circus troupe La Clique’s La Soiree and The TalkFringe Award went to Mindblown a close up magic show by Matt Tarrant.

The Underbelly Edinburgh Award which comes with $27,000 went to beat box vocal percussionist Tom Thum for his show Strut & Fret and Tom Thum.