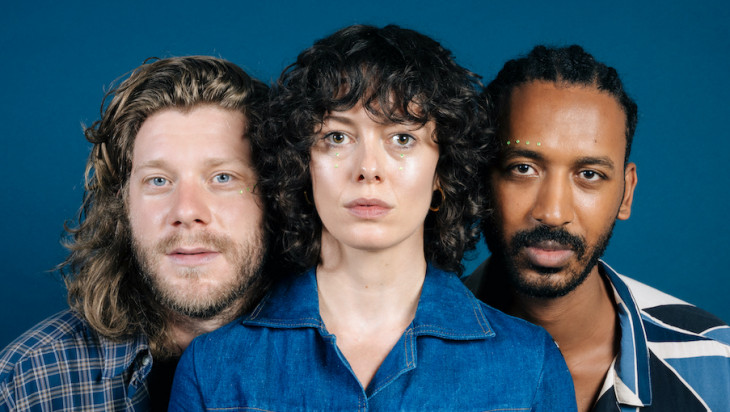 2. Sam just recovered from Covid so we have amazing antibodies.

4. Our show focuses on authentic expression and a genuine love of the craft. We avoid cheap gimmicks and superficial promotions. 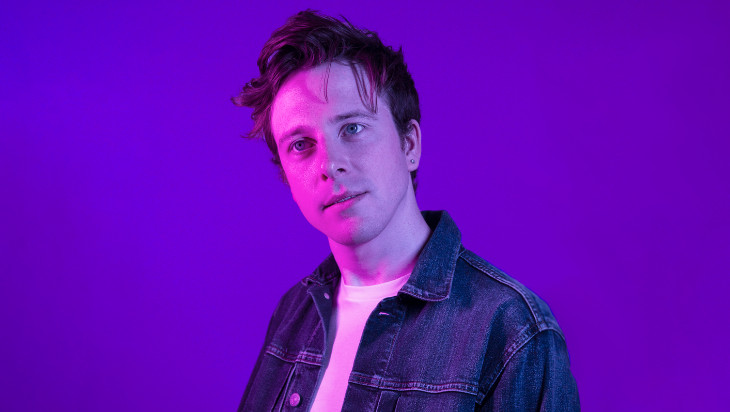 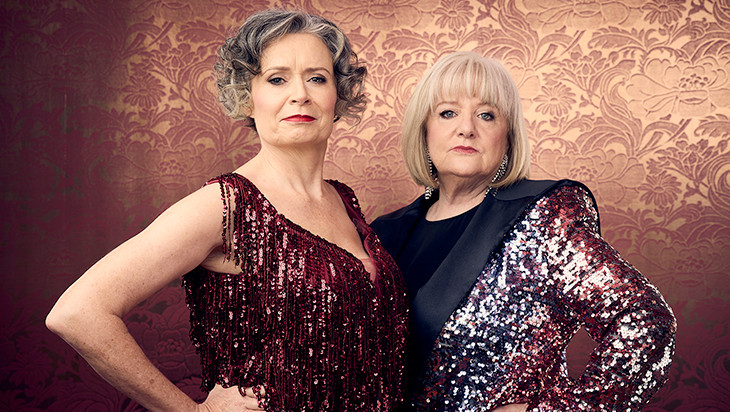 What Better way to decompress after the last two years than to let Jude and Scotty lead us through the hellscape of our unprecedented, shared experience?

The house music is a string of gorgeous showtunes alternating between Judy Garland and Carol Channing while the stage is set with two comfy lounge chairs, a lamp, an old radio, a harp on a plinth… it’s a setting to evoke a comforting homey vibe for two best friends enduring lockdown together. The set seems to be ready and waiting, quietly, for the chaos to unfold.

Judith Lucy and Denise Scott do not let us down. Melbourne’s own odd couple tell the best and funniest tales about the pandemic. Each leave the stage throughout on various pretexts, usually to do with the latest fad hobby of the pandemic, many of which, we’d forgotten about. This gives the other the time and space to have some intimate storytelling time with the audience. There are also big silly props, wigs, costumes, singing, dancing, running gags galore and surprise special guests. Wackiness builds to a hilarious, surprise, apocalyptic crescendo, but don’t panic, we are in the safe hands of professionals.

Denise and Judith have been making comedy together for decades and they’ve been working this show up before audiences interstate, so unsurprisingly it’s tight as a drum. Yes, OK, I’ve heard them do quite a bit of this material, over the past year or so, but I’m a fan, so have been following what they’ve been up to. I find I’m  laughing my arse off anyway and it makes the surprises all the more enjoyable. I’m hugely impressed with how they’ve put this whole show together, well, they’ve had plenty of time on their hands and have used lockdown wisely, it’s a fabulous production.

I’ve seen a lot of their joint work and honestly think this is the best show they’ve done. To take some pretty genuinely dark, depressing experiences and spin them into cathartic comedy gold takes talent and experience. They’ve still got it and They’re Still Here. Thank god. 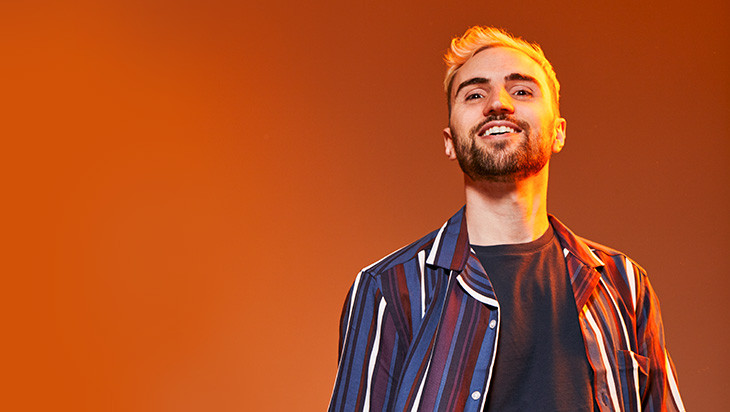 The two flights of stairs that lead up to The Toff In Town in the old Curtin House building help walk off a pre-show meal (although there is an elevator for those not so inclined). An impressively large and diverse Tuesday night crowd made the trek up the stairs to kick their festival off with Simon Taylor.

According to the MICF website, Taylor has written for such luminaries as Shaun Micallef and Jay Leno – and working for such comedy heavyweights has had a very positive impact on his style and talents.

In an industry where content is dominated by nark, Simon Taylor is a breath of fresh air. His material is not political or based on negativity – rather he takes his audience on a journey based on his own life experiences, including his recent marriage, his quest for a dog, and his travels in the States. Throughout this, the common thread of his beautiful relationship with his grandfather is interwoven amongst the stories, and gives the hour a solid foundation in genuineness and warmth.

Simon’s on-stage presence is glorious. An accomplished story-teller, he comes across like a friend who you like to spend time with, just to listen to his hilarious interpretation of what’s been happening since you last met. His 2022 offering also gives Simon an opportunity to show off some pretty impressive back-up skills in music, poetry and magic along the way – and he offers a masterclass in setting up a gag then blindsiding the audience with a surprise punchline.

Simon’s book – One Night Stand has received very positive reviews, and he is more than happy to make himself available to sign copies and have a chat at the end of the show.

Whether or not you’ve seen him before, or read his book, this is a show well worth adding to your list for the 2022 MICF. 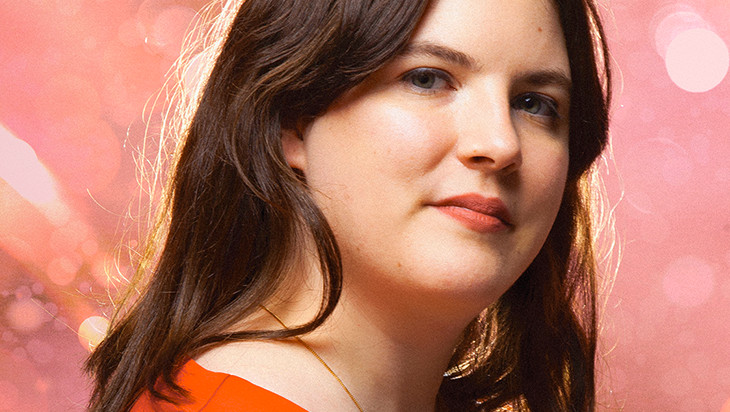 Despite the blurb for the show, which makes it sound like Kit Richards is coming to burn down all her bridges, don’t expect Kit to spill the dirt, she makes it very clear from the beginning that she will not be naming names but she is going to share how a comedian broke her heart and made her quit comedy.

That’s the first curiosity of the show, how can she say that she had to quit comedy when here she is in her 3rd Melbourne International Comedy Festival Show in a row? We only find out much much later that the heartbreak happened 7 years ago, and judging by the tears, although she felt ready to return to the stage generally, she might not be quite ready to create an amusing show out of it.

Kit’s previous shows have been enjoyably quirky and certainly covered a lot of darkness and light about Australian Colonial History and Scandals in Australian sport. They also displayed her talent at song writing, singing and storytelling. It’s the storytelling element that is disappointingly deficient in this year’s show.

At some point early on, she stops and says how she shouldn’t be getting so dark so early in the show (no please do get dark Kit!). The inference is that she will reveal all about the darkness later in the hour. The problem is, she never really delivers. She complains about being badly treated by her ex but also flips it by saying she wants to make it very clear that he didn’t treat her that badly…. which leaves the audience somewhat confused.

It feels like Kit is tip toeing around what this show should be about, so it becomes really hard for the audience to invest, or believe that she is ready to share her experience in a meaningful way. In other news she has a bit of a blog online, that goes into much more depth about everything. You might want to read it to make sense of the show. Or before you go to the show.

Most of the songs are enjoyable, often with witty lyrics about topics such as “Everybody Bombs” (on stage) and the shrewd irony of “Comedy’s not meant for Girls”. I love her poppy style that sets her apart from traditional cabaret or musical comedy, but it needs more theatricality and an over arching story that makes clear sense. The Nicest Guy in Comedy feels more like a concert performance of a breakup album than a laugh out loud storytelling comedy show. The video clips add to the impression.

Kit’s finale is a heartfelt cry from her gut that the culture must change to make the comedy world a safer, kinder place. It’s genuinely moving and no one can disagree with her. If only the show was searingly funny or coherent enough to carry it all off.  The vibe is melancholy rather than ferocious and The Nicest Guy in Comedy is recommended to punters who’ve recently had their hearts brutally broken, are looking to share some venting and don’t mind that it isn’t a joke fest. 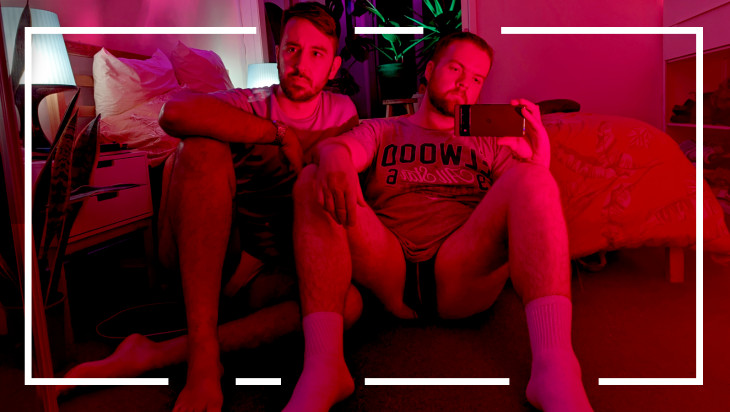