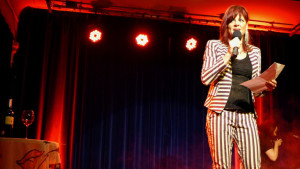 Amelia Jane Hunter has certainly adapted to her home of Berlin like a duck to water and she has returned to the antipodes to describe the wonders of what she calls Die Blaue Stunde, The Blue Hour, where the underground world presents all sorts of decadent delights. In doing so she recounts hilarious yet emotional stories from her life to show how she has come to embrace this European playground.

Tales of babysitting tourists as a guide in Kakadu National Park and being ejected from a cousin’s wedding demonstrate that she is not cut out for polite society and although it can be painful, she can brush these experiences aside knowing she is staying true to herself. Stories about giving holistic advice to a celebrity, going wild in New York with a friend and a brilliant musical revenge on an ex who’d done her wrong give us moments of triumph so we all can celebrate with her.

Hunter warns from the outset that things are gonna get racy and blue, and she certainly delivers on that promise. Dalliances are recounted with lushly worded metaphors and she certainly calls a spade a spade when describing the unpleasant people she has the misfortune to encounter. Her material certainly appeals to groups of 40-something women out on a girl’s night but it also has a deep resonance for all audiences as she acknowledges her own foibles, lampooning both herself and this often grotesque cast of supporting characters.

On stage she is a force of nature: aggressive, confident, in your face and opinionated. She prowls the stage like a caged animal as she tells her tales of a world that restricts such a free spirit. It’s wonderful to witness her storytelling in person: describing the scene in deep detail and using poetic language so that all are rapt, only for her to floor us with a hysterical and biting comment as a punchline. It’s akin to snarky footnotes scrawled in the margins of a classy novella.

It’s a delight to spend an hour in the company of a person like Amelia. Here’s hoping she visits us again soon for more brilliant tales from the wild side of life.

Die Blaue Stunde (The Blue Hour) is on at The Greek Centre until April 23
https://www.comedyfestival.com.au/2017/shows/die-blau-stunde-the-blue-hour