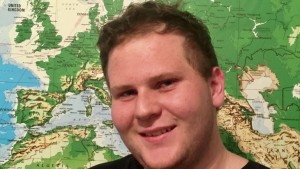 Andrew Kelso’s A Virtual Tour of Melbourne takes the audience through a detailed history of various aspects from the city’s past. This comedic lecture is not only highly informative, it also contains plenty of cheeky historical jokes, digs at current (and not so current) events and some whimsical wordplay. If that wasn’t enough, there’s also a brief quiz so that audience members can show how smart they are.

For a show selling itself as a virtual tour, Kelso doesn’t do much theatrically with the tour theme. Aside from a couple of quips and references to walking, this is essentially a slide show of Melbourne landmarks with witty commentary. Similarly he doesn’t adopt a persona to suit the topic, leaving us with Andrew presenting this information that he admits to finding on Wikipedia. This demonstrates his stand up talents adequately but it lacks razzle dazzle.

His spiels are huge collections of facts and figures which Kelso impressively recites from memory with few hitches. On the surface it all seems legit so any humorous misinformation contained within will probably pass you by. There are a lot of local references in his jokes which he occasionally stops to explain to outsiders. He has a pleasant chatty demeanour on stage and the content is always family friendly.

Some segments are a little dry and favour trivia over funny but others have amusing comments, creeping puns and a bit of social satire. Fatigue sets in part way through this performance as we are pummelled with fact after fact with jokes thrown in at seemingly lengthening intervals. The segment on the gold rush seems especially long because although the Ballarat goldfields figure heavily in the history of Melbourne, going into so much detail about what happened in Ballarat tends to bog things down. Sometimes you have to kill your darlings to make for a snappier show.

This stationary tour is a fun and informative hour for all ages. If you need to brush up on your Melbourne trivia and have a laugh, this emerging stand-up comic is your man.