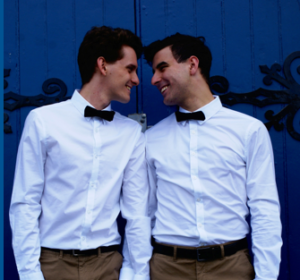 A wedding play comedy, but not quite Dimboola (the 70s Aussie classic by Jack Hibberd that celebrated and lampooned the mundane and traditional wedding). Michael and Philip are Getting Married in the Morning is about as far from that little country wedding as you can get. Michael and Philip wake up the day before their wedding, nervous and excited, without the baggage of warring families, invitation lists, table placements etc. But of course there is baggage, and drama, that gradually reveals itself as the day moves on.

When this play was first contemplated same sex marriage was yet to be made legal. The play when created was a bit of a ‘What if..” exercise and this is still an interesting exploration of a brand new thing in Australian society.  Many parts of the play can be read as somewhat symbolic with characters who represent the forces that have kept same sex people from marrying, and one who carries the heavy weight of gay history with him on to the stage. Some of the themes around gay men and their galpals have been played out in a much gentler way on Will and Grace, but they are explored here in a much darker and down and dirty way. The ideas have not been cleaned up to suit a free to air TV sitcom audience, thus it can be a bit jawdropping at times, and even push things over the edge, but still compelling and believable.

The happy couple are a beautifully played by Bayne Bradsaw (Michael) and Ryan Stewart (Phillip), and Anna Reardon is astonishing believable as the monstrously self-centred Tally. The company all work together as team. The play overshoots it’s ending somewhat (we only really need one surprise family reunion at the end and the toxic friend needs to be given the boot rather than an unnecessary reconciliation chat about stuff we’ve already worked out), but is generally a lot of fun and the audience warms to the characters who develop interestingly throughout.

From what I can gather from the less than informative programme and an only slightly more informative website, the play has been created from scratch by the Fred the Alien theatre company rather than by a single playwright. This is pretty impressive considering the interesting ideas and the  hilarious and witty banter in some of the scenes, though it might explain the occasional patchy bit of dialogue.

Originally created for Melbourne Fringe 2017, this encore season benefits from having had a previous run to iron out many of the usual kinks. There are still a few pacing issues, with a farcical aspect to some of scenes and ideas – so it would benefit from a bit tightening to pull this off. Most comedy is about rhythm and there are some great scenes with good laughs here, it would not take much tweaking to really get the laughs rolling throughout.

The Bluestone Church is a neat little Arts Venue and perfect for a wedding play. Dimboola embraces the audience as part of the play whereas Michael & Phillip are Getting Married in the Morning is not really an immersive performance, though we get to be included as wedding guests in a few small moments. The stage is set in two main ways, Michael’s stylish apartment with books and photos from his vast social life and Phillip’s place which is decorated with Star Wars memorabilia. Eventually the space becomes the church where there is not much scene setting required in this venue. Dropping the scene changes and just using the halves of the large performance space to denote the different apartments, like each wedding party’s side in a wedding, would help sharpen the action. More energy and voice projection from the actors would do a lot to improve things too, though they can be forgiven on a sweltering night in a space with no air-conditioning (I recommend bringing a fan along, like most of us smartly did & buy a drink in the foyer).

Go and see this quirky, entertaining, original play at Midsumma, for the laughs and for the celebration of love in many weird and wonderful ways.

Michael and Philip are Getting Married in the Morning is playing at the Bluestone Church Arts Space, Footscray, until January 21