Radio Mystery Theatre is comedy at its most traditional, old fashioned and in some ways this is truly alternative comedy at the festival and it’s a refreshing palate cleanser.

The Cast of Radio Mystery Theatre are ambitiously staging three different radio plays during the MICF. All of them involving murder but sending up different genres. This one Whodiddendunnit is a send up of an Agatha Christie style murder mystery in a big old mansion with a butler, an inheritance, every one having a motive and a re-appearance of a long lost son.

There have been quite a few radio plays on at the Comedy Festival over the years with Radio Variety Hour getting a reprise on over at The Butterfly Club during the festival. This version is more formal and less anarchic but has a great big cast of about eight and is its own kind of fun. It keeps itself nice, with most of the humour being the sort that might have been performed at any time in the past eighty years and had audiences laughing. There were only a couple of anachronisms, like the word nail-gun which I think is actually a bit unnecessary, I was quite enjoying the whole historical re-enactment sort of feel of it all. But if it gets a laugh, it doesn’t really matter, this sort of whacky humour has been around since before The Goons and they began doing their thing in 1951 so in a way it’s in keeping with historical tradition of comedy radio plays after all.

A disappointment for me (in both radio shows on at the moment) is the lack of a specific foley artist. This important radio job that still exists in movies today is a way of making all the sound effects with everyday objects. To me this has always been one of the most exciting components of watching a radio play being performed. It is the big visual component for the audience (“ooh what is he going to use that big tank of water for?”) that the radio listeners will never see but adds to the radio listening experience. Here we had a table laid out with objects that got me excited, a chain, a knife, a bust and so on, but in the end they were used as silent props which did not make sense because they serve no purpose for the radio listeners. So apart from the odd knock on a table by the actors, most of the sound was pre-recorded and without the Foley artist running about doing his or her stuff, it’s a bit like watching a play reading.

This was a very slick production, well written and acted with plenty of laughs. If you are also a fan of 40s film noir or Enid Blyton you might wish to check out the other Radio Mystery Plays Murder Me Again, My Darling and The Adventure of Smuggler’s Cove

5 Good Reasons to see DeAnne Smith: Let’s Do This 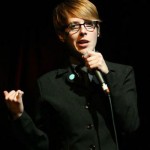 1. The show is super fun. In fact, one reviewer called it “fiercely fun” and another said that it was “One of the oddest but most invigorating experiences you’ll have at a comedy gig.” That sounds intriguing and good, right?

3. I’ll totally high five you if you want me to. If you’re having a bad day, sometimes all it takes is a vigorous high five to turn it around.

4. I’m codependent. For real. I can read the vibe of a room so accurately it’s as though I have psychic powers, and I will do everything I possibly can to make sure you’re having a good time. I’m not happy until you’re happy. I want to be your dancing monkey. This quality is shit for romantic relationships and stuff, but in terms of stand up comedy, it’s a super power.

5. I only gave 4 reasons, which just goes to show you that I’m a rebel, man. I’m so far outside the box, I can’t even see the box from where I am. It’s like a small dot to me. A small, dumb dot.

DeAnne will be performing at the Melb Town Hall – Cloak Room
http://www.comedyfestival.com.au/2013/season/shows/let-s-do-this-deanne-smith

5 Good Reasons to see In the Parlour with Tilly & Flora

2. This is the perfect show to bring your Mum or your Nan along to. They’ll love the literary references and you’ll love the historical pass-agg hilarity.

4. Each show features Tilly & Flora plus a different guest improviser….so you could go two nights in a row and get a completely different show!

5. If you like it then you better put a bonnet on it!

Tilly & Flora will be taking guests at Comedy on Collins
http://www.comedyfestival.com.au/2013/season/shows/with-tilly-and-flora-in-the-parlour 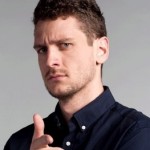 1. His is the only one man sketch show in the festival and is guaranteed to be something you’ve never seen before.

2. It sold out its entire run during the Sydney Fringe Festival and return seasons (so people either liked it or needed to be sheltered in from the cold during those specific days and times).

4. It will make you feel happy, sad, confused, hungry, uplifted, angry and then happy again.

Steen Raskopoulos will be performing at The Portland Hotel in the Gold Room
http://www.comedyfestival.com.au/2013/season/shows/bruce-springsteen-live-in-concert-steen-raskopoulos