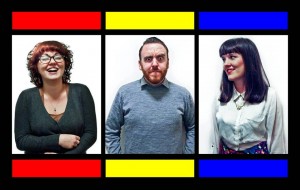 What is becoming a fixture of Imperial Comedy programs, 3 Little Gigs showcases the talents of up and coming performers in the safety of a group show. The Melbourne Fringe line up comprises of Arielle Conversi, Cameron Tyeson and Rose Callaghan.

Hailing from the States, Arielle hit the stage with boisterous enthusiasm. When she launched into material about the differences between her birthplace and Australia, a feeling of dread swept over me as this kind of gear is generally hack material by someone just off the plane. This lifted a little as it did actually fit with the way the show was advertised (worldwide comedy from Florida, Tasmania and Port Melbourne!) and she had a few unique observations that were amusing. The remainder of her set comprised of funny stories of working at a strip club where the humour came from her workmates lack of intellect and class. It was quite an enjoyable set.

Tasmanian born Cam was next and also opened with an outsiders view of Melbourne that was little generic but had a few interesting ideas amongst it. His set really hit its straps in the second half with a routine about his tips for dating success complete with hand drawn visual aids. Some of the cards were a little wordy and contained the exact text he was reciting to us but there were plenty of cute cartoons to entertain. His wordplay was sometimes a little forced but some nice surreal concepts kept us laughing.

Local girl Rose rounded out the night and had a strange, varied tone to her delivery. Beginning with embarassment when referring to an un-named feminine hygiene product, she later described various amusing sexual misadventures using plenty of detail and innuendo. She had a lot of interesting ideas beneath it all but often failed to capitalise on them, many of her jokes drifted off into the ether without pay-off. It was as if she was relying too much on the audience to connect the dots to understand the angle from which she was approaching a punchline rather than actually giving us one.

All three performers displayed confidence on stage to effectively sell their material but their inexperience tended to show through. When lines fell flat they highlighted them with some comments to their fellow performers which came dangerously close to blaming the audience for not laughing. It was nice to see their camaraderie and these interactions gave the show a fun, informal feel, but to some it may not be professional enough for a paying audience. The cold hard fact is: if a line fails repeatedly, it probably needs re-evaluation rather than stubbornly persisting with it.

Overall it was a fun show. They were all still rough around the edges and it’s worth keeping an eye open for their future endeavours. Those willing to take the risk on these relative unknowns will have a good time if they take their greenness into account.

1) 3 Little Gigs is back! 3 gigs! 3 comics! 1 show! The format was a smashing success at MICF this year with Sam Peterson, Nat Harris and Nick Quon. Now it’s back for Melbourne Fringe with an all-new line-up featuring shithot up-and-comers Arielle Conversi, Cam Tyeson and Rose Callaghan. Ripper!

2) Arielle rules. Rip-roaringly funny and an absolute karaoke fiend, Arielle is acerbic, engaging and altogether ace. Plus, she’s from Clearwater, Florida. Do you know what they make in Clearwater, Florida? Funny people and Scientology. So no matter which of the two she turns out to be, you’re guaranteed to get a laugh out of it.

3) Cam rules. Cam is a bloody tall man from Tasmania who carries a tinge of the ginge in his beardage. He likes football possibly a little too much and once appeared in an episode of the SBS game show Letters & Numbers. He lost to a badminton umpire. That bitter defeat has driven him to the stage to tell jokes for the approval of you, the most gracious and attractive audience.

4) Rose rules. Appeared on Triple J’s Debate Night and smashed Nazeem Hussain in a debate about hip-hop? Check. Created the #goslingwatch hashtag that sent the city into mild hysteria? Check. Slinger of c-bombs with surprising and impressive proficiency? You betcha. Rose is funny. Proper funny.

A great way to check out three  up and coming comedians in one night and a great appetizer of bite sized comedies to start your night at the Fringe!

3 Little Gigs is on at The Imperial at 7pm
http://www.melbournefringe.com.au/fringe-festival/show/3-little-gigs/