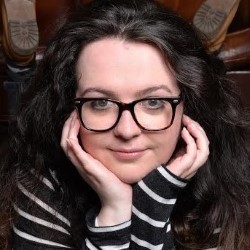 The venue is the ballroom of the Counting House, a lovely elegant venue with large teardrop chandeliers and a skylight dome above the centre of the room, and seats around 120 people. The performer is Ashley Storrie, a vivaciously hilarious Glaswegian lass who looks much younger than her actual age, and who swears like an, ummm  Glaswegian.

Ashley,the daughter of Scottish comedy goddess Janey Godley, was the creator of the If Harry Potter was Scottish video, which has over 30 million views on YouTube. This might be why at least one couple brought their 12 year old son along. Ashley spent a while trying to find the rudest word he knew, as the rest of the capacity audience were being seated. I learned a number of new Scottish swear words which is always fun.

The show itself saw Ashley talking at length about the frustrations of trying to buy cigarettes, a tad about her notorious family and performing her first gig to an English audience (in Milton Keynes).  She got somewhat serious for a bit about smear tests which would have been useful information for the younger audience members. Ashley really knows how to tell a story and the audience were riotous in their appreciation of all of her material.

Adulting was brilliant from start to finish and, as long as you don’t turn up late or heckle, you will be safe. You will definitely learn something from the show, even if it’s just a couple of new swear words (what she called Dame Cleo Laine… is still a complete mystery!).

The room was full on day two of the Fringe so get there early.

Adulting is on at Laughing Horse @ The Counting House until August 26
https://tickets.edfringe.com/whats-on/ashley-storrie-adulting