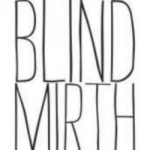 An improv troupe from St Andrews (the first, apparently), consisting of three ladies and four gentlemen performing a series of skits, sketches, games and vignettes based on audience suggestions. As each night is different I can only report on the show I watched, and I found it was generally of a good quality with only a few (inevitable) flat spots.

The show started with a few warm-up routines with one liners from each performer, then a few quick sketches. The main part of the show was a series of sketches linked to music played at random from audience MP3 players (I did not offer mine as the challenge would have been a bit much, what with my classical, jazz, comedy, Aussie rock, Japanese pop, French chanson and weird witchy music may have broken them). The suggestions from the audience were good but, after three weeks of nightly shows, many had already been done, so the troupe has come to the point where the suggestions are becoming more obscure by the day.

The best sequence for me was the search for Pigeon Island, where the evil German/Russian mastermind was turning women into cats, which he then turned into pigeons, which he made the women eat (?), which if I remember correctly, started with classes in organic farming where the seeds arrived individually by pigeon (see, it all makes sense). there was also something about parsnip soup made with cats, whose ghosts haunted the seance which was held in a room under the restaurant kitchen.

In conclusion, it was a fun show, the cast did a very good job of keeping the show flowing and the audience entertained, they’re all young and attractive and as long as the audience does their part and gives a lot of original imaginative suggestions, it’s an excellent way to spend an hour.