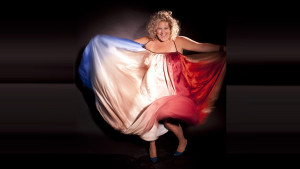 “I’ve got the pussy, I’ve got the power.” These are the pre-recorded lyrics Bridget Everett sings through the speakers after she’s vacated the stage of her show ‘Pound It’. They’re a fitting summary of Bridget’s whole deal, as with ‘Pound It’, she delivers an hour of weird, hysterical, oversexed cabaret and soliloquy, and one of the most radical entries to the comedy festival’s roster.

Most people will be familiar with Everett from her occasional appearances in Amy Schumer’s outstanding sketch/stand-up series Inside Amy Schumer. In that show, Bridget delivered some immaculate comedy acting and bizarre sex-positive anthems. Her timing and half-weeping delivery in the former translated better to TV than the latter, so I was sceptical about how actually funny ‘Pound It’ would be, despite Everett’s vocal prowess. But her Melbourne debut delivers hilariously messed-up speeches (ranging in topics from “flap-jack titties” to “butter pussies”), as well as provides an even better atmosphere for her music. The debauched hilarity of these songs rely on Everett’s interaction with the audience, and her borderline-bananas confidence in doing shit like sauntering up to the most uncomfortable-looking of her spectators and burying their head in her cleavage.

Apart from her brazen breaking of people’s boundaries, much of Everett’s show, particularly the gently-spoken, piano-backed monologues, is bolstered by her knack for absurdity. Think of Zach Galafanakis on Saturday Night Live, playing the piano and musing about That’s So Raven with the conviction of Lawrence Olivier – except with Everett, her nonsense always relates somehow to sex, or incest, or titties, or dicks. Maybe that sentence doesn’t make Everett sound particularly clever, but she is; this is a radical, genuinely niche show that provokes both shocks (oh man, is she really gonna do/wear/say that?) and guffaws (holy shit, she did!).

‘Pound It’ also feels very timely in 2016, when returned interest in feminism is spiking and some may be frustrated that only its’ most palatable expressions garner the most mainstream attention. (It’s worth mentioning that Everett’s persona seems very genuine, so she’s timely but not manipulative; rather, it’s the fashion that’s catching up to her). Here you have a very brash comedian prancing in a parade of tiny dresses and bikinis (spoiler: there are costume changes!) while singing the virtues of different kinds of titties, taking regular swigs out of a paper bag and alluding to her past pregnancies, while giving them all the importance of any dude comedian talking about the number of times he’s put on a rubber. It might be redundant at this point to say that this is not a show for prudes, but if you like your comedy off-kilter, hypersexual, sometimes juvenile, mostly sung, and aren’t adverse to potentially being picked up and played like a guitar, then run, don’t walk, to ‘Pound It’.

Pound It is on at Max Watts until April 3