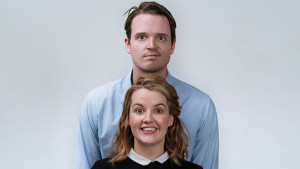 Tom Walker and Bridie Connell are two of the best-known improvisers in Australia right now, thanks to their roles on the new version of Whose Line Is It Anyway. Connell has proven her talent in the form, being a World Theatresports Finalist. Walker brings a wealth of comedic talent, winning Best Newcomer at last year’s MICF. Together, as MotherFather, they’re a fast-paced improv duo, whipping up quirky characters in outlandish scenarios.

Fans of Whose Line will find themselves surprised by MotherFather. There’s no quick shortform games here, but rather a series of scenes inspired by one word taken from the audience at the start of the show. On the night I attended, my suggestion of ‘caravan’ was taken, and as we were told at the start – if the show goes badly it’s our fault because it’s our word that caused it. Luckily for me, MotherFather’s caravan show was hilarious. What started with a sweet scene about a boy asking a girl to a dance spun out into sketches about detectives and carnivals and singing contests. A recurring scene in which Walker deadpanned a lengthy sales pitch for a Kia Sportage to Connell was an absolute highlight.

Walker and Connell gel together wonderfully as an improv team. They deftly step into each other’s characters mid-scene, as required, and are quickly on-board when one decides to switch into something new. They’re skilled enough that they’re willing to mess with each other occasionally and attempt to crack the other up. It feels like MotherFather sits somewhere between longform and shortform improv. The characters are big and bold and gag-filled, and the scenes are very quick. Walker and Connell will hit a joke and then quit it, and so there’s not as much depth as you might normally see in a longform format. It’s perfect, however, for a late-night show. MotherFather never lets the energy drop and the audience loves every second of it.

MotherFather is some of the most dynamic improv you’ll see this MICF. Walker and Connell are incredibly talented and work together brilliantly. It’s some of the silliest late-night fun you can catch this festival.

MotherFather is on at Melbourne Town Hall Cloak Room until April 22
https://www.comedyfestival.com.au/2017/shows/motherfather