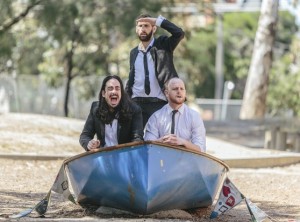 Aunty Donna (Mark Bonanno, Broden Kelly and Zachary Ruane) do sketch comedy, but not as you’ve seen it before. It’s slick, flashy and has a pumping soundtrack that is more ‘dudes doing doughies in the Macca’s carpark’ than ‘a night out at the theatre’. In this self-titled show, the boys find themselves at war with a rival comedy group. It’s a bitter battle, and along the way a whole heap of totally irrelevant, utterly hilarious sketches happen.

There’s a fair amount of filth in Aunty Donna’s work, all of which got some easy laughs from the teenage boys in the crowd. It’s a well-established theme in their comedy, and I guess it just wouldn’t be an Aunty Donna show without the holy trinity of balls, semen and c-bombs – though they bleep the latter these days. But what lifts this up from being simple gross-out humour are some very clever sketches filled with absurdity and sudden dark turns. The ‘Stray Man’ sketch was a highlight for me. Kelly has naïve dead-pan down to a fine art. A series of simple, silly vignettes were also used to great effect, such as ‘The man who didn’t realise there was a queue’.

Tom Armstrong’s music and sound design adds so much to this show, setting the tone from the moment you enter the venue. The songs have all the production value of a music video. Inner monologues become catchy little jingles. Days later, I still find myself singing a few of the songs. It’s that extra element that makes them stand out from other sketch comedy groups in this festival.

It’s great to see that these guys are drawing in a lot of new, young comedy-goers – presumably fans of their very popular YouTube videos. The audience is energetic and there’s a whole lot of love in the room when Aunty Donna perform. These guys have come a long way in a short time, and I can’t wait to see what Aunty Donna do next.

Aunty Donna is playing at ACMI Cube until April 19
http://www.comedyfestival.com.au/2015/season/shows/aunty-donna