Walking into the urbane and cultured foyer of the Gasworks Theatre in Albert Park, I was greeted by an equally urbane and cultured crowd who had gathered to enjoy the work of Carita Farrer Spencer as part of the Midsumma Festival. As Blondie’s Rapture played softly in the background, I knew this was no grungy comedy venue, and that this was going to be no grungy comedy show. What it was, was an hour of top shelf laughs.

Larry and The Dame: Magnum Opus is billed as an ‘hilarious double bill (with herself)’ – and that’s exactly what it is. Over the course of the evening, Farrer Spencer introduces us to two characters – both played by herself.

Audience enters the auditorium to find the stage replete with grand piano adorned with a huge floral arrangement, and a velvet covered table holding a frighteningly large martini. A pianist (the very talented and unflappable Steve Russell) enters and begins to play “There is nothing like a dame” and act one is under way.

In the first half we meet The Dame – a fading cabaret star whose life disappointments have led her to hit the bottle, and hit it hard. Over the course of her set, she manages to consume an unhealthy quantity of alcohol, leading to some wonderful business with her costume, the mic stand and the hapless pianist. The song choices are excellent, ranging from musical theatre standards to Bassey and Eric Carmen – with one of the more unusual interpretations of La Vie En Rose you’re ever likely to see. And goodness, can she sing! The Dame’s tendency to forget lyrics, or indeed which song comes next, sets up some wonderful interplay with the pianist, who remains deadpan and stoic throughout. As the dignity of her character drops away, we see periods of high farce interspersed with moments of poignant introspection. It’s a remarkable performance.

At the half way point, after the diva’s unedifying exit, Steve is left alone with the audience. His version of the well chosen “Stuck in the middle with you” gives Farrer Spencer time to find her second character, Larry Paradiseo.

Larry is a chronically unfit lothario cabaret singer, convinced that he is utterly irresistible to the ladies. He is sleazy, sweaty, and has a dancing style all of his own. But it’s in this character that Farrer Spencer’s talents in audience engagement come to the fore. Accompanied by more well chosen songs from the likes of Marvin Gaye, Tom Jones and John Farnham, Larry inflicts himself on pretty much every female in the audience. The one liners are fun, and have obviously served this character well over the years. It’s delightfully cringe-inducing stuff.

The finale is something that needs to be seen to be believed. It’s a triumph of excellent song choice, a mighty voice, and some costuming brilliance.

The secret to the success of this show is Farrer Spencer’s total commitment to both characters. The physicality of both are spot on, and, as you would expect of someone of Farrer Spencer’s experience, she never drops character for a second. This skill for characterisation, coupled with a wonderful voice and great timing, make this a show you’ll remember for a long time.

The laughter throughout the show was rich and constant. At the end of the hour, the buzz in the audience was palpable and the applause was sustained and enthusiastic. Farrer Spencer obviously knows her stuff, and knows her demographic. If you like walking the line between comedy and cabaret, you’ll find this a worthy contribution to the 2018 Midsumma Festival.

Larry and The Dame – Magnum Opus is playing at Gaswork Theatre, 21 Graham Street Albert Park, from Wednesday 17 to Saturday 20 January. 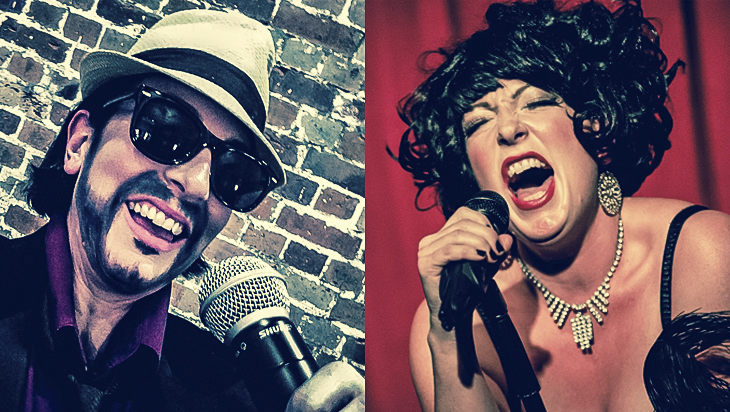 1. You get to see TWO amazing shows for the price of ONE?!

3. You can kick back with a glass of wine and watch this show in the uber chilled surrounds of St Kilda’s famous cafe – The Galleon. (It’s not usually open at night and I’m the only one performing there during the MICF, so it’s a bit spesh!)

4. There are plenty of reviewers and Facebook fans who’ll vouch for how good this show is.

5. A woman dressed as a man, cracking onto women, is always worth a look.

Larry Paradiseo and The Fabulous Dame Farrar are performing Live at The Galleon StKilda
For bookings and information visit the MICF site:
http://www.comedyfestival.com.au/2015/season/shows/live-at-the-galleon-st-kilda-larry-paradiseo-the-fabulous-dame-farrar