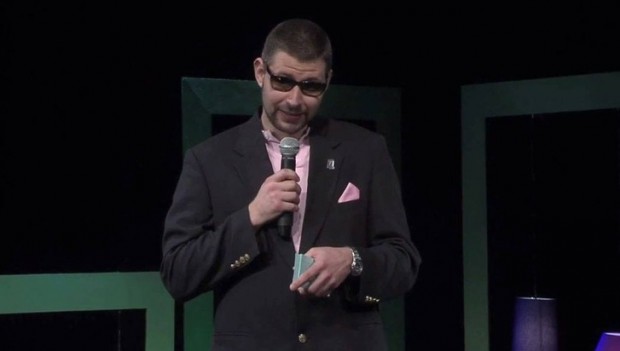 If you’re anything like me, you’ve been wondering for years why there is not a comedy show that is also a dog show. It’s such a hassle trying to attend both all the time. Why not bring them together? Well, lucky for us, our prayers have been answered by ‘The Experiment’. Hosted by Asher Treleaven, Geraldine Hickey and the constantly-grinning Oliver Clark, the late-night show is the perfect opportunity for comedians to get weird.

The trio of hosts complement each other perfectly. Hickey was wonderfully deadpan, giving us some animal facts and reading out a very pertinent letter to our new Minister for Women’s Affairs, Tony Abbott. Clark manned the sound effects and ran interference, dressed like an electric-blue nightmare – the lovechild of Tony Barber and Tony Clifton. Treleaven bridges the divide, holding the reins and fostering an enthusiastically supportive atmosphere that ensures the special guests are met with rapturous applause, regardless of the material they try out.

On the evening I attended there were four guests, all of which were fantastic. Anne Edmonds performed some great new material about Nazi fancy dress, Dave Callan busted some serious moves to Britney Spears’ ‘Hit Me One More Time’, Claire Hooper treated us to a suite of Fables from her upcoming Fringe show and Charles Barrington delighted with his tale ‘The Ugly Natalie Portman’. Alas, on this evening there was no dog show. A lady in the audience did bring a small toy dog, which Treleaven received with the disdain it rightfully deserved.

‘The Experiment’ is brilliantly unhinged and a great chance to see some comedy from the stranger end of the spectrum. With new guests every night, it’s certainly a show that I’m going to check out a few more times. A really great way to top-off your night at the Fringe.

A final note- the call-out for small dogs is entirely serious, so bring your small dog if you have one. As of right now, the prize money has jackpotted to $45. Hot dang!

The Experiment in on in The Ballroom at the Lithuanian Club until October 5.