2. Have you ever seen a pigeon walk through blood? Get ready.

4. I, Fishlace Jones, have produced/performed over 130 one-man shows since the age of 3 ½. You can’t buy that kind of experience.

5. Because I’m definitely, definitely(!) gonna find a way to work Bonnie Tyler’s – I need a Hero into the show. 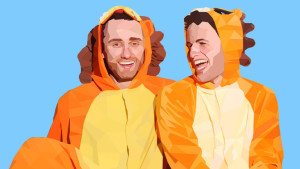 The Lioness (Charlie Ranger and Michael ‘Spank’ Argus) are loud, boisterous and sell the shit out of the material. However they are so much more than just shouty actors hoping that their volume is enough to amuse, they also have plenty of wonderful lines of stupidity, fun wordplay and clever movie references up their sleeves. They bounce off each other effortlessly with Argus usually playing the fool and Ranger as straight man. Each get their share of hilarious lines within this top notch script so one doesn’t hog the limelight over the other. There is enough room for the boys to dick about and get meta on our asses but they don’t stray too far and keep the show rolling on.

What intrigues me most is the way they handle social and political satire. They walk a fine line between parodying their targets and spouting the rhetoric verbatim but where they excel is pushing the ideas to the limit and taking them into some truly inspired and silly places. When some scenes veer into dark territory, a similar treatment ensures that there is some lightness at the end of the tunnel. Then they surprise the audience with huge show stopping belly laughs.

Some sketches tend to go way past their natural end point but, surprisingly, they reward you for sticking with it, with some brilliant twists and turns. A clearly signposted segment of improvisation around a mime Television doesn’t really go anywhere and seems to be an excuse to amuse themselves rather the punters but they do manage to get a few smartarse cracks out of it. They transitioned from sketch into sketch super smoothly and usually continued the themes well. This ultimately impressive show is structured with a loose but deliberate overall narrative that other sketch shows usually overlook.

With impeccable comic timing and ability to handle any distraction thrown at them with ease, you have a highly polished show that nails 80 percent of the sketches; an impressive hit rate. See these guys immediately, so you can say that you saw them before they blew up…or drowned in their own sweat.