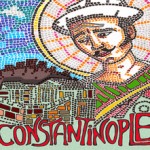 We begin with a journey of sight and (mostly) sound led by Trygve (pronounced Trig-vee) Wakenshaw as he weaves and manoeuvres around his partner in mime and silliness, Barney Duncan, who sits on a couch and reads the paper. It’s a soundscape of clips of words, music and effects that have been edited together and make little sense, apart from the constant clip cloppy footsteps as Trygve stomps about the stage, suggesting that he is on a journey. Unfortunately it was too long, loud, disjointed, and unfunny, such that I was led to despair that this was going to be one of those weird arty Fringe pieces more interested in showing off the performers’ miming skills than keeping audiences engaged.

Finally Barney rises and in the guise of the Emperor Constantine himself begins introducing us to the wonders of Constantinople which does something to start winning me over. Soon we are transported to the Hippodrome and perhaps the funniest skits of the show with Barney playing a horse while Trygve gives him a slightly suggestive massage.

The Festival Guide says this is a historically inaccurate look at an amazing city, obviously they are using the city’s history as a jumping point for their comedic skits, but I am impressed with how many historical accuracies were thrown into the mix to keep history fans on their toes. Their amusing use of pepper as a cocaine like drug does actually reflect the expense of and greed for the black spice at the time. I also enjoy the conversion of Christianity portrayed as a rave party with the 90s dance music morphing into the Hallelujah Chorus. If only the lame dancing about the room didn’t go on just a tad too long without anything much happening.

Apart from the sound being too loud for the small space the technical work on the show was excellent with perfect timing of lighting and sound that was crucial to much of the humour in the show. This is a great show for fans of They Might be Giant’s version of Istanbul Not Constantinople. You get to hear it 3 times, one of them live by Trygve and Barnie accompanied by ukulele. I also love the more subtle use of Rod Stewart’s Young Turks; another of my favourite songs.

There are some beautiful quirky moments throughout Contantinople and the performers are both highly skilled and entertaining physical performers who have about as much fun on stage as two men in togas can. Their inspiration from silent film comedy and Monty Python is clear though the execution is patchy, but then so was Monty Python at time, proving just how difficult it can be to pull off absurd sketch comedy. A fun show for those looking for something a bit different and even more fun if you hang on to your grapes ’til the end of the show.

Constantinople is on in the Old Council Chambers at Trades Hall 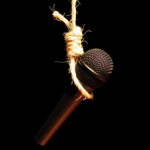 1. Features a new line up this year even your mum will want to get to.

2. Has Five comedians in one show so in the unlikely case you don’t like
one, you don’t have to wait long for another

3. All the comics are all very different in style and delivery to
tickle your variety fancy

4. There are not only jokes, but songs and dance in the show

2. Two men in togas. With special toga underpants on underneath…. mmmm

5. There is an amazing joke with a mushroom.