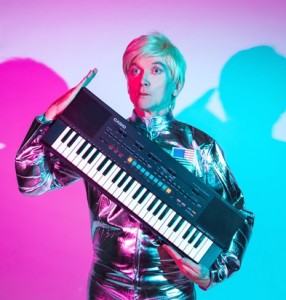 Graham Clone (Ross Daniels) and all girl back up band The Density (“Nebulous Rust” on virtual keyboard and “Airlock Ice Planet” on various children’s toys) are back to take us to the futuristic world of the Nineteen Eighties with their brand of electronic new wave pop. If you’ve never heard of Graham and/or missed his previous show The Future is Incorrect, fear not; he describes his back story as an artist who had his four weeks of fame before disappearing into obscurity.

The songs themselves are a mixed bag in terms of their humorous content. Some have wonderfully strange lyrics using plenty of wacky science fiction imagery. One highlight puts to rest the plagiarism charges levelled at Clone by a certain English performer. Others have minimalist lyrics and rely entirely on the band’s performance for all the laughs.

This show relies heavily on nostalgia of the Eighties for the majority of the humour so some of it may be a little lost on those who didn’t experience it the first time. The mere mention of  popular eighties artists is often enough to get a laugh of recognition. They poke gentle fun at the absurdities of the genre including the fashion, the seriousness of the performers and their musical abilities. In the role of Graham’s backing band, the girls did their fair share of po-faced, ridiculously literal hand actions to the lyrics.

Between the songs things aren’t played too straight and the banter is on the light side, ensuring that the show doesn’t become too accurate to be funny. Graham regularly broke the fourth wall by regularly commenting on the audience response to his jokes and explicitly stating that he was trying to make Airlock corpse. The stifled smiles and laughs by the entire “band” clearly demonstrated that they were having as much fun as the audience.

The show features a couple of guest performers who contribute with a cover version of an Eighties classic. On this particular night we witnessed The Scourge of Russia (Damian Callinan) dance up a storm and Teenie Turner (Bev Killick) singing “Nutbush City Limits”. Just like most of the other songs, the humour comes from the guest’s wacky hijinks rather than from the song itself.

This is a fun hour of Eighties nostalgia performed by a true fan of the music. Children of the era will lap it up and are sure to have a brilliant time.

Graham Clone : Virtually Live is on at The Butterfly Club until April 19

Political Asylum is a monthly line-up of great local political comedians. During the Melbourne International Comedy Festival they take up residence in Town Hall for one night only in their annual Late Night Riot.

The late night show played to a packed auditorium and it wasn’t hard to see why. Every single performer on the line-up was fantastic. Political Asylum regulars Aamer Rahman, Stella Young, Toby Halligan, Scott Abbot and John Brooks were all hilarious, covering topics from Abbott and Gillard to compulsory horse-riding classes for the disabled. Mathew Kenneally was an absolute standout among the regular crew. He’s quick-witted, his material is incredibly strong and he did a great job of hosting the show.

Nelly Thomas and Damien Callinan were special guests for the evening. Thomas amused with tales of remaining diplomatic while hosting talkback on Radio National. Callinan brought a touch of theatre to the proceedings, performing a meeting of the Horsham branch of Amnesty International. His characters were spot-on and painfully funny – his portrayal of a truly woeful ‘green poet’ was my highlight of the night.

The extra special surprise guest for the evening was the wonderful Rich Hall. His material wasn’t quite as politically-minded, but the audience absolutely loved him, cheering for him to stay on after his red ‘get off the stage’ light came on. Hall’s droll observations of Australia had people in stitches. His comparison of our coalition government to the store that does shoe repair and key cutting was particularly funny for its strange accuracy.

If Late Night Riot is any indication of the quality of the regular show in Brunswick, it deserves a packed house every month. These guys are serving up some of the most on-point and entertaining political humor around.

The Run for the festival is over but Political Asylum is on at the Brunswick Green the second Sunday of every month.