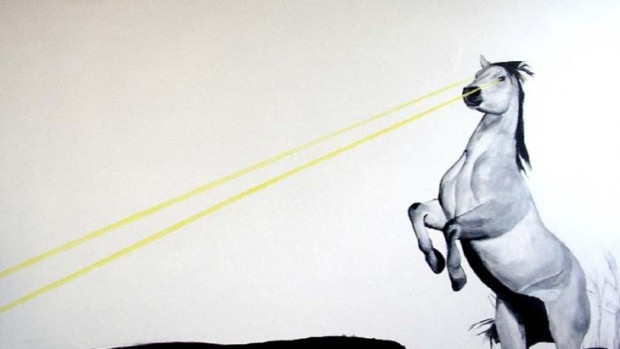 The pre-festival publicity for this show was intriguing, an elaborate and vague title, and the only description being “Content and themes may vary”. They even went to the effort of flyering wearing a horse’s mask to add further mystery. The anonymity was lifted as it was revealed that this is a stand up show featuring three comics who had made the trek down from Brisbane (Hannes Monaghan, Jacob Lingard and David Scullion).

This is solid pub stand up by three comics whose delivery is different enough to provide variety to its no-frills staging. It’s interesting to note that some themes carry through the entire show. All shared the experience of flying down together so all feel the need to cover it. Most of the observations about the process are on the generic side but each give it their own spin to prevent it from being too samey. The other topic that gets a flogging is their inability to understand women which is par for the course for young, straight guys. Thankfully there are enough creative and amusing lines through these routines to add freshness.

Hannes is first to hit the stage and has some entertaining routines about his German mother, relationship break ups and poker machines. A very measured, almost lackadaisical delivery gives us a gentle start to the show but he has plenty of witty lines to keep us laughing.

Jacob is next and gets some humorous mileage out of various medical conditions that he has been afflicted with. Including these ailments gives his treatment of the hackneyed topics in his set some greater depth and a point of difference from others. Self-deprecation fills the bulk of his set which is nicely paired with a touch of jokey dismissiveness.

Rounding out the show was David who has billed himself as “The Irish Stallion”. His is a high energy performance and a logical progression from the other two to end things on a bang rather than a whimper. It is nice that he uses the common topics as segues into related material, often leading us into unexpected areas. His use of off-colour remarks as punch lines provides plenty of guilty giggles.

This being their debut MICF show, it is a good calling card for a trio of emerging stand ups from up north whose future endeavours are worth keeping an eye open for.

Subject To Change is on at Highlander Bar.