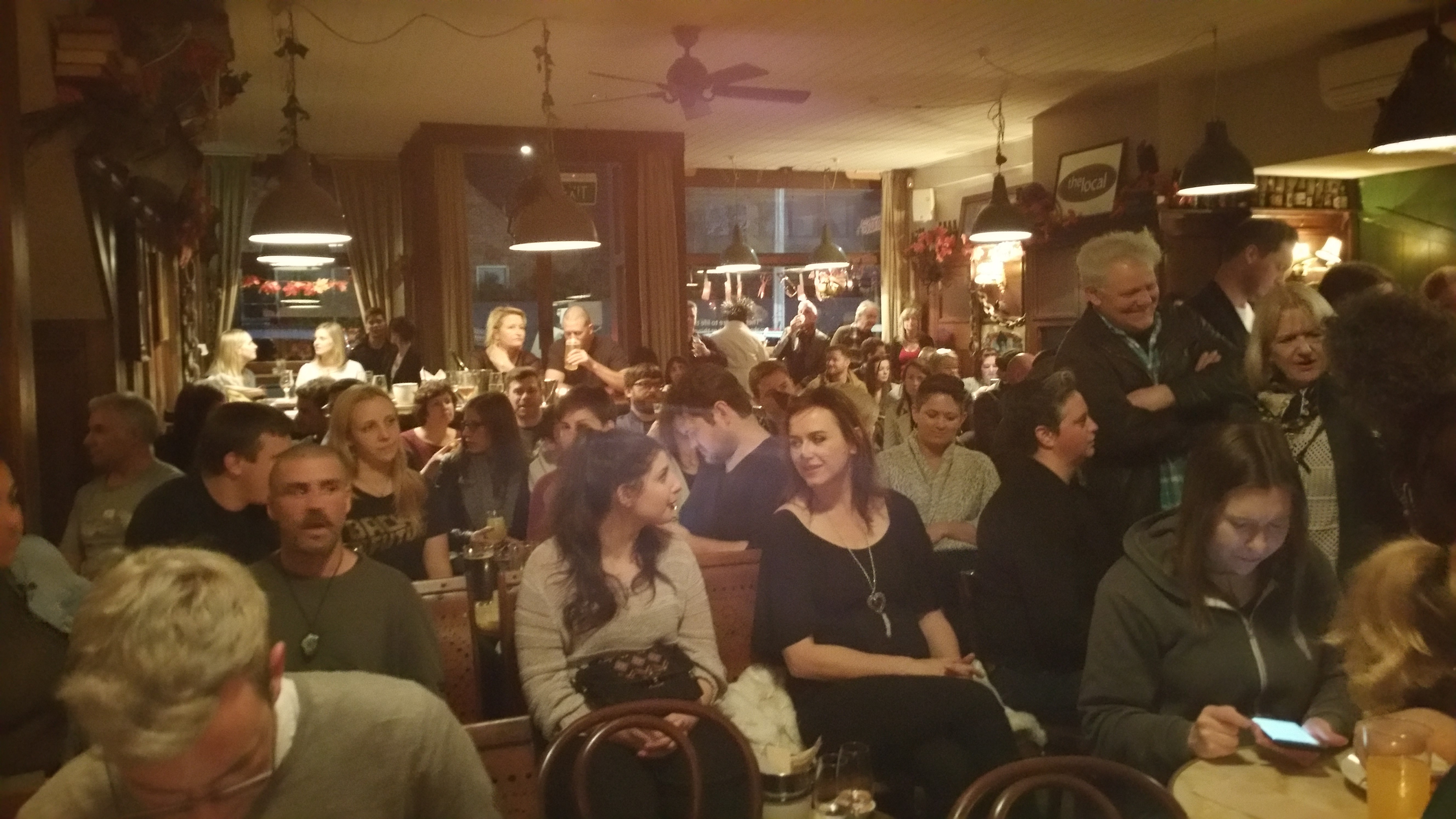 In 2017 I decided to set a challenge for myself to write up every show that I saw in my Lisa’s Live Comedy Big Year Blog. Well. As you can see, it became harder to keep up with in the second half of the year, even though it seems that is when things are usually quieter, I was wrong and life stayed pretty busy and when it was not it was because I was ill. I still kept other records of my gigs and so was able to list them all, but not reviews sadly, so I don’t have reviews of a lot of my comedy experiences for the last part of the year. I also wanted to keep a pictorial record of gigs, but it’s not always possible to take photos and even in the regular comedy rooms, I was not good at taking subtle photos and got caught out and commented upon/told off. Then my flash went off by mistake. Arrrggghhh! So I gave up on my own photos and got some much better ones from room runners or friends with more experience.

Of course I spent a lot of time at my regular comedy haunt Local Laughs, but managed to visit several other rooms as well. I have had a lot of wonderful comedy experiences this year, especially during the trip to the UK which included seeing Daniel Kitson’s Something Other Than Everything at the Roundhouse in London and two weeks at the Edinburgh Fringe Festival where highlights included seeing The Doug Anthony Allstars still making jaws drop in their home away from home, new discovery Jayde Adams just blowing the room away at The Pleasance media showcase with her surprising vocal talent and the hilarious story that goes with it, seeing Yianni do his best work in some time because it came from his life and his heart, Adam Vincent slaying packed rooms with deep dark tales of suburbia and playing interactive Wifi Wars at midnight.

Other highlights of the year include the final shows of the debauched boutique comedy legend that was The Shelf and in particular the performance of Fringe Wives Club who brought the house down and made everyone rush out to see their show.  Andy Zaltzman did the searing political comedy, Plan Z, that everyone had expected from  Ex Bugler John Oliver when he last toured and finally I adored Sammy J’s Magnum Opus – Hero Compex for a 2nd time, to find it had evolved, as the story had in real life and it was joyful to watch everyone’s jaw dropping and howling with laughter as the story unfolded, knowing where it was going. Under the radar: Not enough people were talking about UK comedian Kieran Hodgson at MICF but my goodness Maestro was a gorgeous show and the joyful weirdness of Aussie duo The Lioness who’s show  Peggy Babcock, Peggy Babcock, Peggy Babcock had a much too short run in an out of the way venue.

Its always hard sorting out a shortlist of the best comedy shows. I have picked out 5 outstanding experiences and they are set down in the order that I saw them.

January’s highlight was definitely seeing Wil Anderson and Justin Hamilton in a theatre full of excited fans. Both consummate comedians at the top of their game.  Am determined to see Wil’s solo show this year and looking forward to it. I’ve been missing seeing Justin around the traps since he moved to Sydney but am hoping to see more of Wil Anderson, now he’s taken a job in Melbourne breakfast radio.

Hannah’s final festival show was indeed a showstopper. It was a show about the Zeitgeist, about equal rights, about truth – in life and in comedy, about standing up and being listened to. It was powerful, moving and of course funny. A masterpiece of Standup. During her interview on Comedian’s Comedian at MICF, Stuart Goldsmith shrewdly asked what would happen if this amazing show won all the awards, like The Barry and even the Edinburgh Fringe Best Comedy award?

Would she still quit comedy? Well all of those predictions have come to pass (including a Helpmann Award along the way) and Hannah is still going strong. Having sold out many shows at the Victorian Arts Centre and The Sydney Opera House she is adding further shows this month to the Opera House, followed by Perth and then a month from February in London at the Soho Theatre. They are selling out.

All comedians should go out on this sort of high. The world is her oyster and she’s certainly making the most of it all. Whatever she chooses to do next, I wish her all the happiness.

Craig Ferguson’s quirky tonight show was a staple in our house and I’m missing his Peabody Award winning interviewing style on late night TV. I’ve been hoping he might at least tour his standup comedy here in Australia, as he has happy memories of performing here in the 80s (as do I), but sadly there is no sign of this, especially as he is now busily hosting a successful drive time radio show. Craig decided to record some of his radio shows live from Edinburgh, taking advantage of all of the gathered performers from around the world to appear as guests, and all of the Squirrels were lucky enough to attend in the wee hours of the Festival. The Rose is a lovely old theatre in the New Town with a great atmosphere and the packed audience had an awesome time.  The live radio broadcast lasted for 2 hours and consisted of two very entertaining in-depth chats with performers who were often old friends of Craig. In our case an old close friend impressionist/comedian Jan Ravens and Scottish writer Iain Rankin. Ron later saw the show with guests Daniel Sloss and Tommy Tiernan and Craig had Aunty Donna on the show towards the end of the run. Its a pity there is no podcasts of these recordings and that the radio show is not broadcast outside of the Americas.

A brilliant sitcom in 6 episodes about a couple who chooses to be childless while they navigate the changing, diminishing, modern workplace in radio and book publishing and their changing, diminishing friendships as their friends succumb to parenthood and all that entails. The episodes are easily as entertaining & funny as other recent Australian ABC comedies, so it’s surprising that they were knocked back for Television broadcast. The talented performers were all having a ball playing the various characters and Jay Mueller made a brilliant honey tongued Narrator. This was a unique and special experience this year.

These shows were recorded for podcasting and so you can listen to them all here.

A fundraiser for Action Aid curated by the inimitable comedy goddess Janet A Mcleod. All of the performers brought their A Game and there was not a weak spot on the night. It really felt like a Comedy Gala and we were all pretty privileged to be there laughing our arses off. Great to have a majority of women in the audience too. It wasn’t just some of the best Australian women in comedy it was some of the best Australian comedy on stage.