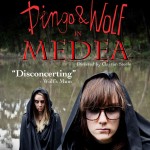 In an intriguing concept, Dingo And Wolf (Laura Dunemann and Eleanor Webster) have taken on the challenge of performing the Greek tragedy Medea to showcase their brand of train-wreck theatre. As with any Dingo & Wolf performance, the main thrust of the show is the comical conflict between the pair. Wolf attempts to present a lofty piece of theatre that is often too ambitious for her talents while Dingo misses cues, fluffs lines and generally becomes preoccupied with insignificant items in the room.

This duo bounced off one another well in these daggy personas. Their bickering was creative and they used some clever insults but having this as the main focus of the show was a bit of a stretch for an hour as it got slightly tiresome at times. It was nice to see a little twist when Dingo was given the opportunity to shine briefly in the spotlight, but she was soon put back into her place and then it was back to Wolf being a bully for every flimsy reason. A fair chunk of the show involved the girls rushing about the performance space utilising homemade props and costumes while taking their places on the stage which was exhausting to watch. When on stage, they primarily drew on their character’s hammy acting and numerous mistakes to make themselves the butt of the joke, rather than the text itself.

With Medea as a framework they were given the opportunity to have some fun with the text and boy did they have fun! Characters were renamed to give them a modern feel, historical facts were wildly misquoted and plot points and locations were misconstrued. Some scenes were completely replaced by inappropriate dance numbers (including Wolf’s soulful ballad that was a great reworking of the plot in song) and there was the inclusion of wildly inventive scenarios that added to the classic story in their own wacky way (Jason’s Bah Mitzvah scene was wonderfully silly). There was even a ridiculously short and relatively extravagant interval included in the madness. The impressive thing was that despite all the detours they stuck with their brief and did give us a fairly entertaining & extremely silly version of Medea.

A video monitor added to the audio/visual component of the show by displaying title cards, showing chunks of text for the audience to read (thus the audience cleverly became the Chorus of the play), and popping up misinterpreted images in lieu of backdrops. This would have been more successful if it had been placed on a higher pedestal for all the audience to see.

Aside from the Wolf-centric programme thrust into the audience’s hands at the start and Wolf’s constant boasting, there is little in the way of background for the duo as they launch into their epic. Not that there is really anything important that you need to know about the relationship between this pair of infantile characters to enjoy the show, but their assumption that we all knew their history is bold.  Whether you’re new to this talented duo or have been following their career, you will have fun in the company of this odd couple.

Dingo & Wolf in Medea is showing at The Portland Hotel – Locker Room until October 14
For bookings see the Fringe Festival website
http://www.melbournefringe.com.au/fringe-festival/show/dingo-wolf-in-medea/ 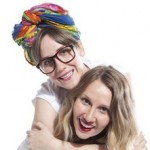 Dingo & Wolf are a super talented comic duo of young ladies who’ve been working on their double act in gigs for around a year now. They have a classic comedic relationship with strong characters; Wolf (Eleanor Webster) being the uptight straight woman and Dingo (Laura Dunemann) her daffy second banana. I have eagerly awaited their Debut festival show, but worry that I may have expected too much from first timers

This is the third time at the festival this year that an act has started with the audience kept in the dark staring at an empty stage for way too long. With only audio and a hint of torchlight while they bickered backstage, it became a tad tedious and some editing would not go astray. When they do appear it’s in business attire, so different to their normally wacky outfits. It was the sort of beginning that may have worked better for future shows after the audience have come to know them.

The pretext for their show, a self help seminar, is not exactly a fresh idea, but it is a fun conceit with the right performers and they made it work as a flimsy framework to show off their personalities and hang their schtick around. It takes a while for their friendship to show, with a shared giggle at a naughty joke, giving the audience a chance to warm to them. There was also a bit of gentle audience participation, though it probably needed a bit of development, because there seemed little point to it.

The humour is mostly about their incompetence, bickering and silly faffing about. They did manage a bit of savvy, ironic humour based on female body image that let the audience know there were smarts behind all the lunacy. This section, which informs us of the popularity of thin girls, includes ‘Thinspiration’ handouts, which we sadly couldn’t read in the dark, but are for taking home. There are also some rather pornographic pictures that are left up on flip board for an uncomfortable amount of time.

Of course the seminar is eventually left behind with their business suits, as the show descends into an enjoyable chaos and the focus of the show shifts to their relationship. Their charm and musical grand finale thoroughly win the audience over. Although not high on the laugh-o-metre there were certainly a lot of grinning, happy faces in the audience throughout the performance. You can’t help but fall in love with Dingo and Wolf and I’m sure this is the beginning of a beautiful and successful relationship.