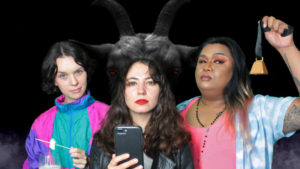 The first surprise about Scary Goats Tour is that it’s not a bunch of sketches written by an Impro troupe, but an original funny play written by Chloe Towan and Nathan Fernandez.’

Performed by Dax Carnay as Ree, Jess Ciancio as Mel and Dominik Shields as Tess they are able to create a world on the oil of a smelly rag, without using sets or costume changes and only a handful of props. Jess’s Mel plays straight woman to deliciously sardonic Dax and delightfully wacky Tess as comedy side-kicks and they create a great team.

Mel is a vain Vodcaster whose online show is about exposing fake purveyors of the supernatural. Ree is her weary, much put upon sidekick who does all the tech to get Mel’s show online. Finally we meet the effervescent Tess, who mixes a bubbly but bonkers personality with occasional terror, as their Tour Guide. There is not a lot of depth to the characters, just enough to get the audience on side which suits the nature of the farcical play. The actors took a little while to warm up and were a bit stilted at first but as the play took them over and the audience were laughing, they relaxed into their parts and things took off.

The play builds the tension of the horror element well with subtle hints of something being Not Quite Right and it paid off beautifully. The timing of the comedy wasn’t always spot on and it was most notable in the chase scene montage that was clearly a tribute to silent cinema. Farce is hard, it requires razor sharp timing, whereas this was somewhat loose, but it contained some cute jokes and audience winning enthusiasm from the performers.

You can take older kids and teens to this, though it does get a little genuinely scary at one point, but the jokes & stupid puns help keep it from going over the edge. I recommend it as something a little bit different at the Festival, for fans of theatre, horror, comedy or goats.