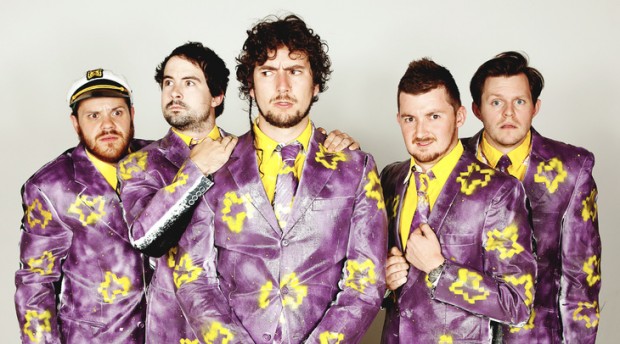 This sketch comedy quintet, consisting of Stuart Daulman, Dylan Cole, Jarryd Clifford, Andrew Belsten and Jake Ludowyke breathe new life into a well populated genre with their particular brand of silly, frantic and charming sketch comedy.
Things started off a little touch and go, with fears that the sketch troupe were going to rely on tired old cultural stereotype tropes of various nationalities; Mexicans, French, Scottish, etc. for laughs. And while these caricatures did form a substantial part of the show’s content the performers do manage to transcend predictability and add new depth, character and surprises to them.

There are many highlights throughout this show. The scene where a stick transforms in the hand of the performer into all manner of objects was absolutely mesmerising; proving high-tech props aren’t necessary to capture the imaginations of the audience. There are some fantastically complex displays of word play that grow ever more ludicrous as they carry on, and are a testament to the preparation put in by the performers.

While the rules and regulations of how sketch must be enacted seem almost set in stone Wizard Sandwiches do bring several new items to the table. The method by which they merge one sketch into the next created a fun intertextuality between sketches; displayed skill of the performers in switching seamlessly between characters, and created a second or two of delightful confusion for the audience as they grew familiar with this new technique.

The crew complement each other nicely; each bringing a distinct persona to proceedings with no one member dominating time or focus across the performance. The constant revolution between characters kept the plot fresh and the audience engaged.

Following in the fine footsteps of tradition of Monty Python and the Goodies, but not as absurd or confronting as League of Gentleman or Tim and Eric, you’re guaranteed a night of fun, frivolous and frenzied comedy.

The Last Lunch is on at Trades Hall – The Music Room until April 20
http://www.comedyfestival.com.au/2014/season/shows/the-last-lunch-wizard-sandwiches