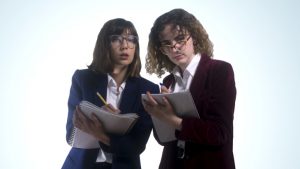 Iszzy Williamson (Psychology student) and Emily Weir (experienced therapy user) have joined forces to dispel the myths of therapy via role-playing, bad puns and even song. They threw plenty ideas at the wall, some which stuck comedically, and imparted some important information about mental health.

Their material was focused on the factual and a little light on the actual jokes, possibly due to the weighty topic of mental health. To compensate they relied on the wacky delivery to garner laughs. This approach was greatly entertaining so they almost got away with it. Most segments have great ideas but don’t actually build to a punchline.

It was a very high energy performance with the ladies zinging around the room, acting out various scenarios and even having a go at a bit of cabaret. The pair bounced effortlessly off each other – Williamson covered the facts while Weir piped up with silly comments in a Martin and Lewis kind of way. Role-playing exercises demonstrating the dos and don’ts of raising the topic of therapy were well acted and great fun. These exchanges produced many amusing lines that had us all chuckling. This pair were having such a great time bantering and surprising one another with infectious enthusiasm but at times felt as if they were only addressing each other rather than the audience.

There was a segment of audience participation that came across as a bit aggressive when no one volunteered to have their problems solved. For a show targeted towards fragile individuals, this approach was strange. All the action took place in the middle of room so those in the front had to twist themselves to see and since no one had microphones, the exchange was difficult to follow.

A lo-fi flip chart provided all of the visual aids – a charming touch. The sound and lighting design was excellent with wacky sound effects popping up when required and musical motifs played to indicate various states of mind. At times it was like a carnival ride through the psyche.

Everyone Needs Therapy was a fun hour in the company of two very enthusiastic and energetic young performers with a heartfelt message to impart.

Everyone Needs Therapy is on at Tasma Terrace until April 21
https://www.comedyfestival.com.au/2019/shows/everyone-needs-therapy