Ethan Addie is a young gay comedian that grew up in homophobic regional Australia – you’re laughing already right? He certainly is. 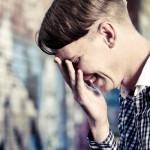 Ethan identifies with Beyoncé – but not the gay community. A self confessed ‘gay anti-hero’, he has made a lot of ‘Rookie Mistakes’ (Hey! That’s the name of his show!) After just twelve months of doing stand-up comedy Ethan is going to the Edinburgh Fringe Festival. Here are five agayzing reasons you should see his show ‘Rookie Mistakes’:

1. He is the epitome of an ‘underdog’. He has only been doing stand-up comedy for twelve months and is doing what even veteran comedians fear – their first show at the Edinburgh Fringe Festival.

2. Ethan is actually pretty funny. After just 6 months on the Melbourne comedy circuit he appeared in the Grand Final of the 2012 St Kilda Laughs Festival new comic competition and the Preliminary Final of the prestigious 2012 Australian Raw Comedy national talent search. He has since performed at the 2012 Melbourne Midsumma Festival, and the 2012 Melbourne International Comedy Festival.

4. Ethan’s story is unique. There isn’t a single reference to the good old fashioned gay-comedian-fallback-jokes (think MY MUM LOVES WINE AND IS AN ALCOHOLIC – LOL). From dating a Jehovah’s Witness to living with a Rent Boy to studying chemistry, Ethan enjoys sharing his ‘Rookie Mistakes’ with an unsuspecting audience. Even gay men are enlightened (usually terrified) by the stories that Ethan eases his audiences into *cough* so to speak.

5. The reason Ethan is doing the show. Ethan ran into an ex-boyfriend who was doing much better than him. Refusing to admit defeat, Ethan told a white lie. Everyone has done it. His lie was that he would be doing a solo stand-up show at the Edinburgh Fringe. Imagine his surprise when his ex replied that would be there, and would love to see the show. Was he serious? Ethan thought so.