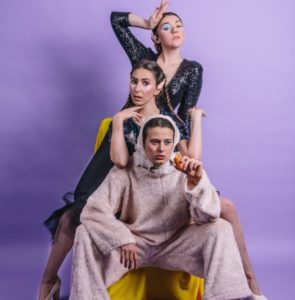 Maggot is a sketch show by the New Zealand trio known as The Scungebags (Angela Fouhy, Freya Finch and Elle Wootton) that pushes absurdity into the red. They create a world of bizarre characters such as rat loving cowboys, quarreling cats, desert travelers of indeterminate ethnicity and cheeky elves that delights and confuses.

The central conceit was “Internationally famous pop-sensations” The Baby Girls (Wootton the perky one, Finch’s surly one and Fouhy as the slightly feral sex pot) wanting to branch out into serious art… or at least it seemed to. The absence of links between most scenes made it unclear if these actors were playing characters who are were in turn playing characters or this was just a random collection of sketches. The scenes came dangerously close to outstaying their welcome at times with extended repetition and usually didn’t lead anywhere substantial with most of the laughs coming from the strange journey these “worthy artistic statements” took, rather than leading up to a punchline. What would be detrimental to another show actually enhanced this performance by creating unpredictability and mayhem.

They often employed the help of some audience members and made it reasonably harmless so punters were more than willing to contribute to the fun. Even if they met reluctance, this trio had clever workarounds to keep things on track. The audience reactions allowed them to show off some improv skills with a clever quip or two, often with a feminist bent.

The ladies were easily able to garner a laugh with a merest glance or gesture. Their character work was brilliant with an effortless portrayal of each weirdo in the menagerie. Boundaries between performers were non existent as inappropriate groping and bumping and grinding titillated the giggling punters. The scripted dialogue was suitably strange and delivered with wild abandon to match the physical silliness.

Maggot has been collecting awards in New Zealand and they are sure to add some more. This anarchic show was a wonderful showcase of clowning by an extremely talented group.

Maggot is on at Arts House – Parlour Room until September 21
https://melbournefringe.com.au/event/maggot/