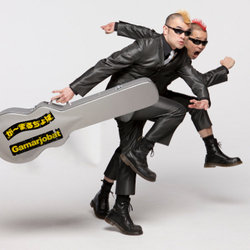 The two suited and mohawked Japanese mime artists make their return to Edinburgh with their loud and crazy mime show. This was an hour that went by very quickly as the pair got the audience worked up into a frenzy of fast paced tricks and stunts. There was audience clapping contests, a little bit of the audience dragged up on stage (including one tiny girl who was very relaxed about her stage performance, but I think that might have been due to the chupa chup bribe she was given). The older girl who was dragged on stage was a little less impressed with the part she was asked to play, though.

This was definitely a show for all the family (the 400 seat venue was packed and at least 20pc were kids), there is no swearing, but there are quite a few tricks I’m sure the kids will be attempting when they get home, we had a sing-a-long, which is quite a feat when the only word they said was “Gamarjobat”, and a number of excellent impressions of famous rock stars. Both of the stars of this show are in their forties now but they haven’t slowed down yet and the speed with which they perform some of their stunts is impressive.

If you are looking for an hour of uproarious fun, music, mime, entertainment and visual trickery, that will have everyone clapping along, you should book for this show. But book early as it is selling out. You can also buy their DVD after the show.

Gamarjobat (ga-ma-jo-bat) Rock Out! is on at The Gilded Balloon Teviot at 4.30pm